Weatherford polishes up his resume 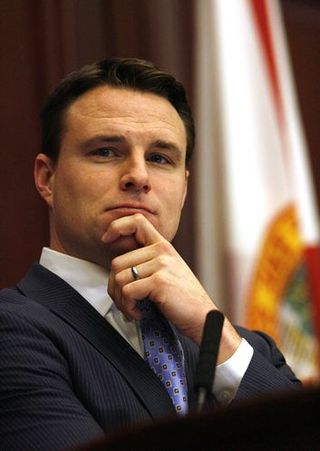 How does he do it all?

Just last month, former House Speaker Will Weatherford, R-Wesley Chapel, announced that he and his brothers Sam and Drew were opening a consulting company. The aptly-named Weatherford Partners would provide clients "with a broad range of business expertise and will invest capital directly into private companies with a strategic focus on Florida."

Sounds complicated. And still Weatherford has found time to get involved in other activities.

Only a day after he announced his fledgling company, the Florida Chamber of Commerce announced Weatherford was to sit on its Board of Directors, allowing him to join his father-in-law, former House Speaker Allan Bense, a longtime Chamber power player.

Talk about timing. Weatherford got good mileage out of the previous day's announcement. The Chamber release identified Weatherford as managing partner of Weatherford Partners BEFORE it mentioned he also happened to be Florida's former Speaker of the House.

And then on Friday came news of yet another appointment, this time to the board of directors of the Republican State Leadership Committee. The committee's chairman, former Florida Attorney General Bill McCollum said in a release that he was "thrilled to welcome Will to our Board of Directors. Electing new, talented Republicans to state legislative chambers remains among the RSLC’s top priorities, and Will’s knowledge from his four consecutive terms with the Florida House of Representatives will be extremely valuable to our mission."

RSLC is a major force in campaign fundraising for legislative races nationally. In the 2014 election cycle it helped raise more than $600,000 for House and Senate races in Florida. Weatherford was known as a formidable rainmaker himself, so he should fit in nicely.

When term limits forced Weatherford out of the House last year, he was coy about his future. He said he was going to be a more present husband and father, and he was going to focus on bolstering his private sector bona fides.

His political future? "I'm not looking for something," Weatherford said then. "If there's an opportunity, I'll take a look, but there's a value in stepping back."

As Friday's RSLC announcement shows, Weatherford might have stepped back, but he still has an eye on the stage.

RSLC Welcomes Will Weatherford to Board of Directors

WASHINGTON, D.C. – Today, Republican State Leadership Committee (RSLC) Chairman Bill McCollum announced the addition of former Speaker of the Florida House of Representatives Will Weatherford to the committee’s Board of Directors. He joins an experienced and engaged RSLC Board of Directors committed to implementing a vision for growing the largest caucus of Republicans, including electing lieutenant governors, secretaries of state, state legislators and other down ticket offices.

“I am thrilled to welcome Will to our Board of Directors,” said McCollum. “Electing new, talented Republicans to state legislative chambers remains among the RSLC’s top priorities, and Will’s knowledge from his four consecutive terms with the Florida House of Representatives will be extremely valuable to our mission.”

Weatherford, now a Managing Partner at Weatherford Partners, was the youngest state Speaker in the nation during his 2012-2014 Speaker tenure. While Speaker, Weatherford served on the Executive Committee of the RSLC’s Republican Legislative Campaign Committee (RLCC), the only national organization dedicated exclusively to electing more Republicans to state legislatures.

“The RSLC set the bar incredibly high with record-breaking down-ballot victories around the country in 2014,” said Weatherford. “I look forward to finding ways to build on their many accomplishments as a member of the Board of Directors.”

Will was the 84th Speaker of the Florida House of Representatives, serving from 2012-2014, during which time he was the youngest Speaker in America. Throughout his four consecutive terms in office, Will was a strong advocate for social upward mobility through free enterprise and education reform. He was also a thought leader on other pro-growth solutions including lower taxes, pension reform, and free market health care solutions.

Will is the Managing Partner of Weatherford Partners, a firm with deep roots in Florida and a strong global network that partners with owners and management teams of high integrity to build great businesses through the provision of capital and strategic business advisory services.

Will serves on the board of Sunshine Bankcorp, the National Coalition for Capital, the U.S. Global Leadership Collation, Take Stock in Children and Jobs for America’s Graduates. Will also served as a Rodel Fellow at the Aspen Institute.

Will spent six years as a board director at Florida Traditions Bank prior to its sale to Home BancShares in July 2014. Will is the Founder of Red Eagle Group, a boutique investment and business consulting firm.

A graduate of Jacksonville University, Will is married to Courtney; they reside in Wesley Chapel with their four children: Ella Kate, Molly, Madelyn and William.

About the RSLC Board of Directors:

About the RSLC
The Republican State Leadership Committee (RSLC) is the largest caucus of Republican state leaders in the country and the only national organization whose mission is to elect down-ballot, state-level Republican officeholders.  Since 2002, the RSLC has been working to elect candidates to the offices of lieutenant governor, attorney general, secretary of state, state legislator, the judiciary and other down ticket races.  The RSLC has more than 150,000 donors in all 50 states. During the 2013-2014 election cycle, the RSLC was active in all 50 states and picked up ten new state legislative chambers, leading to an all-time historic high of 69 chambers controlled by Republicans.  Additionally, Republicans saw net gains in over 60 chambers and picked up six lieutenant governors, leading to 31 total Republican lieutenant governors, along with holding a Republican majority of secretaries of state, now at 28.  The RSLC successfully expanded the Future Majority Project and “Right Women, Right Now” initiative, spending more than $6 million in direct support of Republican candidates of diverse descent and women, leading to the election of 164 new candidates. Last cycle, the RSLC also launched the Judicial Fairness Initiative and the new top-level domain for the Republican Party, ‘.gop.’ To learn more about the RSLC, please visit www.rslc.gop or follow @RSLC on Twitter.