Why won't the governor move the Cabinet meeting from the fair grounds? Some reasons 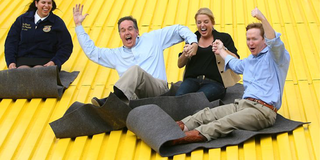 The governor’s handling of the firing of former FDLE commissioner Jerry Bailey, and subsequent dust-up over Cabinet affairs, has prompted the three members of the Florida Cabinet to call for a through vetting of the personnel policies, hiring and firing and oversight practices the state Constitution tasks them with.

But there is one problem: the next meeting of the Cabinet is scheduled to be held in Tampa during the State Fair. It’s a tradition Agriculture Commissioner Adam Putnam has welcomed for years, and is in keeping with the Cabinet’s practice of occasionally moving the business meeting to other parts of the state.

Aware that the deliberation is likely to be serious, intense, and interfere with the light-hearted photo op with 4-H clubs, fried ice cream and giant slides, Putnam asked Gov. Rick Scott to shift the venue back to Tallahassee. Scott said no.

We asked the governor's communications office why. They refused to answer.

Attorney General Pam Bondi didn’t protest the failure to shift the venue but her spokesman released this statement: “Although the Attorney General is pleased to have the Cabinet meeting in her hometown to honor local heroes, she is prepared to discuss the recent issues involving FDLE at a Cabinet meeting anywhere in the state.”

Chief Financial Officer Jeff Atwater also didn’t complaint but his spokeswoman released this statement: “The CFO initiated the call for the Cabinet to address the matter of how Cabinet Agency directors are hired and evaluated. He is ready to get on with this urgent issue. Be it at the Tampa Cabinet meeting or a Tallahassee Cabinet meeting, the CFO is ready to get to it!”

Putnam, it seems, was outnumbered. When the governor’s office was asked to give a meeting as to why they rejected Putnam's request, they refused to say.

This has all the makings of being one of the most vigorous, and important, discussions the Cabinet has had since the four Republicans first began their jobs four years ago. So why didn’t the governor agree to leave the meeting in Tallahassee? Here are some of the reasons emerging in Tallahassee circles:

Photo: Florida Cabinet members take a trip down the giant slide at the 2014 State Fair. Courtesy of FreshFromFlorida.com