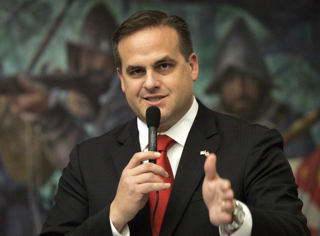 A college student spending Spring Break in Tallahassee didn't expect to get punched in the face by a Miami lawmaker.

But that's what happened sometime between late Monday night and early Tuesday morning, hours before the start of the annual legislative session, according to the student.

Peter Alberti, a Connecticut native who studies in Charleston, said state Rep. Frank Artiles decked him at Clyde's and Costello's, a downtown Tallahassee bar steps from the Florida Capitol.

"He was trying to get by, up at the bar, to get drinks," Alberti told the Miami Herald in a telephone interview Tuesday. "He punched me in the face."

"Didn't happen," he said in a text message to the Herald after learning from a reporter that the newspaper had spoken to Alberti. "It is a set up."

It's the second time Artiles, who represents deep Southwest Miami-Dade County, has been whispered about in the Capitol over a purported punch. One of Artiles' friends, former state Rep. Doug Holder, even joked in his farewell House of Representatives speech last year that he would leave Artiles former state Rep. Rob Schenck's punching bag.

"Aides aren't so good for that," Holder said, referring to a rumored, earlier scuffle between Artiles and another lawmaker's aide.

Tuesday's incident was made public at 1:37 a.m., when L.J. Govoni, a former aide to U.S. Rep. David Jolly, a Tampa Republican, tweeted at Artiles:

Hey @Artiles118 nice punch u threw tonight at that 21 yr old kid. Hope ur proud. Ur a joke. @SaintPetersblog @anthonypedicini

Govoni continued to jab Artiles in a series of tweets that tagged several people, including a blogger and a reporter. Govoni did not respond to interview requests Tuesday. But another man who witnessed the incident independently corroborated Govoni's -- and Alberti's -- version of events.

Alberti said he "had no idea" who Artiles was after the lawmaker clocked him and moved behind the bar at Clyde's.

Three men -- apparently Govoni and his friends -- identified Artiles to Alberti and angrily tried to get the lawmaker's attention. They also pushed Alberti to press charges. Alberti said he hasn't filed any yet and is unsure if he will.

Artiles, reached by phone before a reporter had spoken to Alberti, gave a different account of the night, saying he didn't hit anyone. He did acknowledge being heckled when he stood behind the bar.

"Nothing happened last night," he said. "This person was asking me to go outside. He was with two of his friends. I think he was intoxicated."

But didn't take the bait, according to him: "I left the bar. I did not have a drink at the bar or anything."

Artiles went as far as to say he might ask an attorney to issue a cease-and-desist order against Govoni to stop him from tweeting at him. He also speculated he was being targeted by political enemies opposed to his contentious positions, such as challenging Citizens Property Insurance and trying to prohibit local governments from allowing transgender men and women into the public bathrooms of their choice.

Miami politicians have been known to brawl over the years.

Then-Reps. Luis Rojas and Mario Diaz-Balart had to be separated on the Florida House floor in 1991 after Diaz-Balart, in a personal discussion, insulted Rojas' mother. Seven years later, Reps. Jorge Rodriguez-Chomat and Carlos Valdes tussled in the chambers over private-school tuition vouchers after Rodriguez-Chomat called Valdes a "jackass" and grabbed him by the necktie. And in 2000, Reps. Carlos Lacasa and Renier Diaz de la Portilla duked it out on the parking lot of Miami Spanish-language radio station Radio Mambí after Lacasa's father insulted Diaz de la Portilla's father on air.

But those fights were between politicians -- not with a member of the public.

A former Marine, Artiles suggested Tuesday he would only deliver the kind of blow that would result in serious pain.

"If I had hit somebody, they'd be in the hospital," he said.

But Alberti dismissed the severity of the punch.