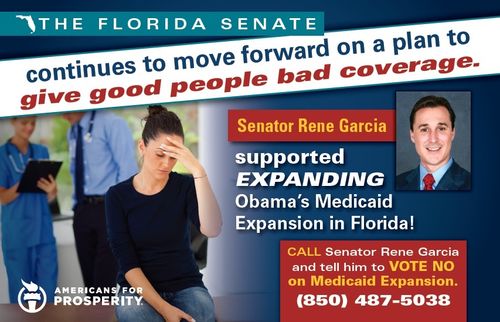 The conservative advocacy group Americans for Prosperity Florida sent out mailers Monday targeting the 23 senators who have approved the proposed alternative to Medicaid expansion.

"We are reaching out to Floridians in every district of every member of the Senate that has taken a vote in favor of expanding the broken and bloated Medicaid system under Obamacare," AFP state director Chris Hudson said in a statement.

The Senate has been advancing plan to use federal money to extend healthcare coverage to nearly one million low-income Floridians. The proposal is not Medicaid expansion as envisioned under the Affordable Care Act. Instead, it would require Florida create a state-run marketplace for private health insurance. What's more, beneficiaries would have to pay small monthly premiums and meet a work requirement.

Gardiner said he agreed with AFP that "Florida should not expand the existing Medicaid program."

"What we have done instead is to develop a consumer-driven approach that provides access to high-quality, affordable health care coverage while promoting personal responsibility," he said in a statement. "Our plan includes conservative, free market guardrails that will control the cost and growth of the Medicaid program for Florida’s taxpayers."

Still, state director Hudson said the Senate would be better off focusing on the overall cost of health care.

"We have been advocating for expanding telemedicine, reforming certificate of need, and expanding scope of practice as some of the possible ways the Senate can take bold steps to making health care more affordable and available to all Floridians," he said.