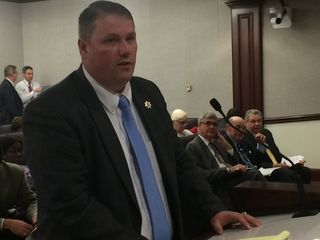 Breaking their silence about Florida’s troubled prison system, several current and former prison inspectors told lawmakers Tuesday that their bosses repeatedly told them to ignore evidence of possible criminal wrongdoing by corrections officers fearing it would give the agency a "black eye."

The inspectors, who testified under oath before the Senate Criminal Justice Committee, told the committee that corruption and cover-up is so rampant that the department has neither the staff nor the desire to weed out even a fraction of inmate abuse, medical neglect, gang violence and organized crime.

Several current and former prison inspectors directed their criticism to the inspector general’s office, whom they said would suppress criminal charges and interfere investigations of high-ranking prison officials.

"We are at the point where we can no longer police ourselves,'' said John Ulm, a veteran law enforcement officer who works in the inspector general's office. He said the atrocities he has observed on the streets of America pale in comparison to the human rights violations occurring in the Florida prison system.

Senate Committee Chairman Greg Evers, R-Baker, said the testimony was the last chance his committee may have to expose evidence of troubles within the agency during the two-month session. He suggested that DOC Secretary Julie Jones, and the inspector general’s office, were “dragging their feet” in their promises to reform the agency and said it may be time for a special legislative committee to be assembled to further investigate the claims of employees.

“Apparently we can stumble across more than what the investigations have found in the past few years by just asking the questions of the right people,’’ Evers said after the meeting. “Yes, we've got a crisis."

Jones has acknowledged that the agency has been chronically underfunded and understaffed but has repeatedly defended the performance of Inspector General Jeffery Beasley, who is hired by the Chief Inspector General but reports to the DOC secretary.

The unprecedented testimony comes amid a series of reports on the suspicious deaths of inmates and public outcry by civil rights groups over the treatment of mentally ill prisoners.

Doug Glisson, another inspector, said that despite apparent evidence of medical staff violations, the agency did not sustain any charges because the suspect had a “capital connection,” a reference to a high-ranking friend in the state Capitol.

Ulm, Glisson and inspector Aubrey Land filed a federal whistleblower lawsuit last year claiming that Inspector General Jeffrey Beasley instructed them to back off an investigation involving a possible cover-up in the killing of a 27-year-old inmate at Franklin Correctional Institution in 2010. The inmate, Randall Jordon-Aparo, died after he was repeatedly gassed by corrections officers whom the inspectors said fabricated their stories about why he was gassed.

The suit was dismissed by a federal judge last week but is on appeal.

Ulm testified that since he began aggressive probes of widespread corruption, he has been "threatened" and has been the subject of several internal affairs investigations that appeared to be in retaliation for his pursuit of exposing corruption.

Land acknowledged that while there are scores of good corrections officers within the prison system, the culture of corruption and staff shortages has made it difficult for them to do their jobs adequately.

"We have offered up solutions that no one listens to,'' Land said.

One example he cited involved the black market tobacco market which he said is "worth millions'' of profit for staff and corrections officers who smuggle it in on a daily basis.

Gang violence is also rampant, Land said, describing an incident in which an elderly, wheelchair-bound inmate -- in tears -- told him how he had been robbed of all his belongings and slashed in his neck by gang members. No corrections officers were around to protect him, he told Land.

Gulf County Sheriff Mike Harrison, who formerly worked in the inspector general’s office, said he was told by “upper level management” not to bring allegations to a state attorney that a warden and assistant warden at Calhoun Correctional Institution were getting paid for allowing contraband into the facility.

“The tended to want the department to not go the criminal route but the administrative route to make it look favorable on the department,’’ he said. “Criminal charges filed against a warden or assistant warden would be a black eye on DOC.”

In another case, at Jackson Correctional Institution, allegations of medical neglect by a nurse resulted in “two inmates almost losing their lives” but the charges were “covered up,’’ Harrison said, “based on a relationship that the warden was having with the nurse.”

Land commended the committee for pushing bill that would create an independent oversight board to review allegations without interference from department management.

“We need leadership,’’ he said.

UPDATE: DOC Secretary Julie Jones left the meeting before it was over but provided this response:

“The information provided today represents one view of several incidents that happened years ago. The cases mentioned, when appropriate, were presented to the State Attorney’s Office for prosecution, and declined due to a lack of probable cause or sufficient evidence. To ensure a strong criminal case, the supporting evidence must be thorough, complete and rigorously reviewed before prosecution can be considered.

"When a case is declined by the State Attorney’s Office for criminal prosecution, and there is evidence to prosecute civilly, investigators are encouraged to take decisive action to ensure that the individuals in question are held accountable.

"I am personally disappointed that the environment in which current and former Department staff were asked to testify did not allow for the presentation of all known facts regarding the incidents in question. I have the utmost confidence in the abilities of the Office of Inspector General and Department staff to take decisive action in the interest of safety and security for both themselves and the inmates in our custody.”