Fast-moving prison reform gets another round of approval 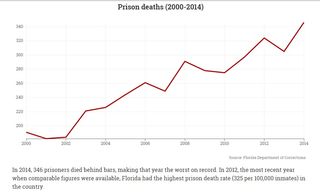 A fast-moving bill intended to reform Florida’s troubled corrections agency received unanimous approval Wednesday through a second Senate committee but opposition is mounting from opponents who say the bill creates another layer of bureaucracy.

The bill, approve by the Senate Criminal Justice Appropriations Committee, would create an independent board to provide oversight of the Department of Corrections and impose strict new policies intended to protect both inmates and employees.

This is the second committee to give approval to the wide-ranging measure and it has one more stop, the Senate Appropriations Committee, before it reaches the Senate floor.

The measure was crafted to respond to a growing number of reports about questionable inmate health care provided by private prison contractors, understaffed prisons that have been chronically underfunded for years, buildings in disrepair and staff accused of using excessive force, covering up suspicious inmate deaths, allegations that the agency retaliates against whistleblowers.

Its lead sponsor, Senate Criminal Justice Committee Chairman Greg Evers, said that while the proposal, SB 7020, is not perfect it attempts to get at the heart of the issues that have caused senators to lose faith in the ability of the agency to police itself.

"I'll be honest with you, I don't think the bill goes far enough in some respects," Evers, R-Baker, told the committee Wedneday. “But I also want you to understand this is a heavy lift at this time. If we make it any more heavy, I'm afraid this balloon may not float."

Among the proposed changes, the bill requires the department to establish a policy to protect inmate and staff from retaliation when whistleblowers speak up. It requires the agency to track how often security guards gas inmates and to report all violent incidents.

Evers has received more than a dozen letters from current and former DOC staff complaining about conditions at the agency, particularly about how seriously the agency takes into account allegations of staff corruption and wrong doing.

The bill would give the commission the ability to investigate criminal and administrative complaints against DOC with investigators who would not answer to the agency but to the govenror’s Chief Inspector general.

Sen. Rob Bradley, R-Fleming Island, who proposed the creation of the commission, said the change was needed because DOC’s current inspector general “has not been an effective mechanism for rooting out bad actors. That's what it's there for and it hasn't done its job-- for whatever reason,’’ he said. “We have to change the culture in DOC. Status quo is not acceptable."

But when it comes to staff retaliation, Evers and other senators conceded the proposed bill still falls short.

Sen. Darren Soto described an incident in Polk County where a corrections officer gassed a sleeping inmate and when another officer complained the agency’s inspector general turned the case against the complaining officer.

The officer called Soto, who worked to have him transferred to another prison, but Soto wondered what protections exist for other outspoken staff.

Barney Bishop, president of the Smart Justice Alliance, called the oversight commission “a level of bureaucracy that is not needed.”

He said he did not want to give subpoena power to such an organization because it could “put guards in serious danger.”

“There is a crisis in Florida’s prisons,’’ she said, and the Legislature has responded with piecemeal solutions in the past.

“At this point, where it’s tantamount to an emergency, we have a responsibility to come up with a fix that works,” she said.

The bill also creates a new third degree felony for DOC employees or private prison providers who willfully neglect an elderly or disabled inmate and a second degree felony for an neglecting an inmate “and in so doing cause harm.”

Sen. Joe Negron, chairman of the committee, said he was concerned about creating new laws that punish people for neglecting inmates.

“It’s already against the law to treat people inhumanely – whether you work for DOC or or anywhere," he said. “When you criminalize the failure to do something, you have to be very careful because how is that defined?”

Evers said the changes were needed to “change the culture” at DOC, which has seen inmate deaths rise and use of force reach record numbers.

DOC Secretary Julie Jones has not opposed the proposal but argued that many of the changes could be handled internally. She is seeking $16.5 million in additional money to increase staff by 1,400 – about 500 less than she says she needs to be a full capacity – and wants another $15 million to make needed repairs.

After the meeting, Jones told reporters that she disagreed with the allegations of the letter writers and defended the Inspector General as doing “an outstanding job” whose resources were limited.

She blamed the complaints by some anonymous inspectors on them wanting to have more investigatory power than they should have.

"We have a problem with certain individuals in the IG's office that want to be FDLE agents. They are not FDLE agents," she said. "You have some individuals that want to just do the big shop and don't want to do the day-to-day minding the shop. The more of the small stuff that you do, the systemic issues in a facility so they don't become big things, the fewer big things you have over time."