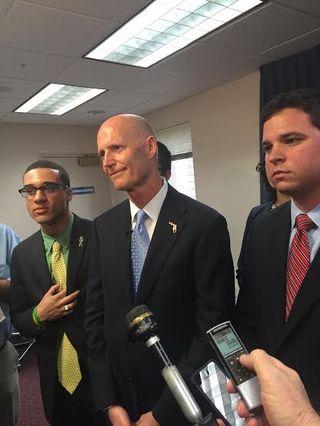 Gov. Rick Scott took part in a rally in the Capitol Wednesday aimed at building support for his latest college affordability proposal.

The plan would prohibit state universities from increasing the cost of graduate-school tuition. It would also make college textbooks exempt from sales tax, require colleges and universities to publish the price of each course before the semester begins, and enable students to use Bright Futures scholarships during the summer semester.

The event was organized by more than a dozen student leaders who back the measure.

The governor's proposal is contained in SB 938 by Republican Sen. Anitere Flores, which is on the agenda for Monday's Senate Higher Education Committee meeting.

There is no identical bill in the House. But Rep. Jared Moskowitz, D-Coral Springs, has a bill that would make textbooks tax exempt (HB 1317).

Scott said he believed the $41 million tax cut for textbooks was possible, even despite some uncertainty about the budget.

"We have the money to do all of these things with our budget," he said.

He urged the students to lobby their state senators and representatives on the issue.