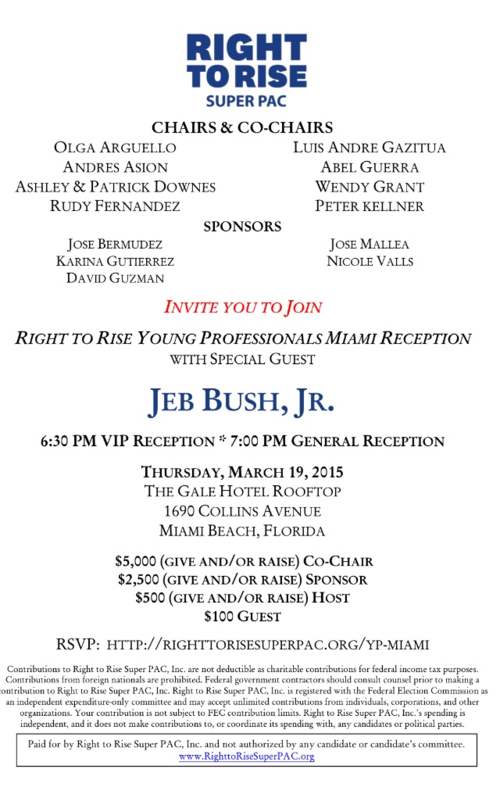 Jeb Bush Jr. will be the featured guest next week at a Miami Beach fundraiser for his father's likely presidential campaign.

The reception will benefit the elder Bush's Right to Rise super PAC, which is bringing in big money before the former Florida governor formally jumps in the 2016 race.

Bush Jr., the youngest of the governor's three children, has become the PAC's go-to guy host for fundraisers geared at young, professional Republicans. He headlined one such event in Washington D.C. earlier this month; other fundraisers are scheduled to take place this week in Austin and next week in New York and Chicago, according to an invitation obtained by the Miami Herald. The PAC has dubbed the four events over the next two weeks "March Madness."

The Miami Beach reception will take place March 19 at the rooftop of the Gale Hotel. The minimum donation is $100, with up to $5,000 (either donated or raised from other donors) to "co-chair" the event.

Among the co-chairs already listed is Luis Andre Gazitua, a local government-affairs attorney and lobbyist who also serves on the board of directors of the Maverick PAC founded by Bush Jr.'s older brother (and now Texas land commissioner) George P. Bush.

"I am proud to support Jeb Bush Jr. as he leads the Right to Rise initiative to engage the next generation of American leadership as his dad seriously considers the possibility of running for president of the United States," Gazitua told the Herald in an email.