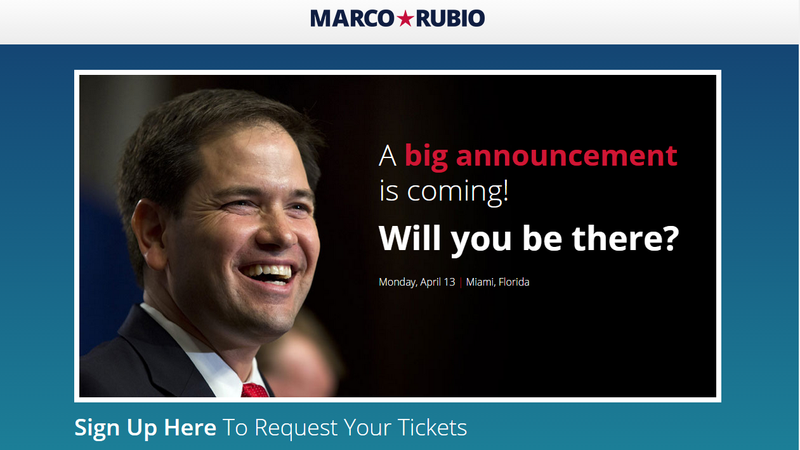 Marco Rubio took another step Monday in the carefully planned roll-out of his apparent presidential campaign when he confirmed on national television that he will make a formal political announcement in two weeks.

"I will announce April 13 what I'm going to do next, in terms of running for president or the U.S. Senate," Rubio said on FOX News' The Five show. He then flashed a broad smile.

He directed supporters to a website, marcorubio.com, where they could request tickets for the event, which will take place in Miami and in the afternoon. Rubio wouldn't say where, but the Tampa Bay Times reported last week that the likely venue appears to be the Freedom Tower downtown.

"I'm looking forward to it," was all Rubio would say.

He declined to contrast himself to Jeb Bush, the former Florida governor who is also expected to run but may not make it official until the summer.

Instead, Rubio pivoted to what sounded very much like the foundation for a presidential campaign speech that touched on the "American exceptionalism" argument he has made since his successful U.S. Senate run in 2010.

"The time will come for comparison-shopping for voters and others," Rubio said. "What's at stake in 2016 is not simply what party's going to win, or what candidate is going to run. The fundamental question in 2016 is what kind of country do we want to be in this new century.

"Do we want to remain an exceptional country, a land of equality of opportunity, the strongest nation on Earth?" he said. "Or are we prepared to diminish and decline? And decline is a choice, it's not our destiny."