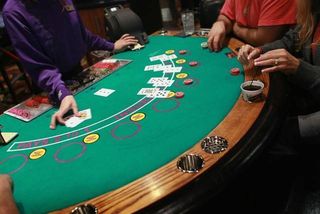 A new poll financed by the Seminole Tribe of Florida finds that voters like the level of gambling currently being offered today throughout the state and support the renewal of the gaming compact between the Tribe and the state.

The poll is a "screaming" statement about "where people see gaming. They like it the way it is. They fear having more of it,'' said Adam Goodman, the poll's media consultant in a conference call with reporters.

A portion of the tribal compact expires in July and the Florida House has proposed a bill to end it and replace it with a massive expansion of gaming in South Florida. The Florida Senate, meanwhile, says it is considering not renewing the option of the compact that expires this year.

Does voter support for the status quo mean the Tribe agrees and will not attempt to expand gaming by negotiating additional games at its casinos? Not quite.

From the Tribe's  press release:

TALLAHASSEE, Fla. – As the Florida Legislature considers several options that will determine the future of gaming in Florida, a new statewide poll released today has found a majority of Floridians support renewing the Seminole compact and oppose the expansion of gaming.

Among the poll’s findings:

Recently, a bill in the Florida House of Representatives was introduced with several options related to gaming.  The poll surveyed attitudes about the legislation and found:

Support for the Seminole Compact has increased in recent months. A previous poll conducted by Newhouse in December 2013 found 59 percent supported it.  The current poll surveyed 793 Floridians, and included a 600 sample of voters statewide (margin of error +/-4.0% in 95 out of 100 cases), as well as “oversampling” in the Tampa and Orlando DMAs in order to have a larger sample size in those two key markets.

To view the poll and supporting materials, please visit www.seminolecompact.com.