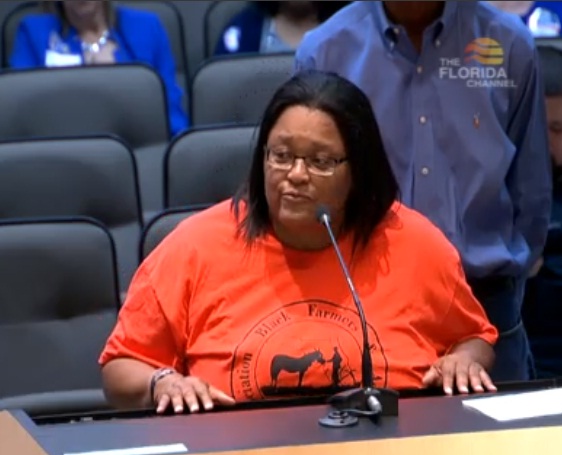 A bill attempting to get the implementation of the state's Charlotte's Web marijuana law back on track has created a new dilemma for its sponsor: how to make it equitable for black farmers.

Under the existing law, only farms that have been in continuous existence for 30 years and grow 400,000 or more plants are eligible to bid for one of five licenses to cultivate and distribute the non-euphoric strain of cannabis for patients with epilepsy, cancer and chronic muscle spasms.

The result: the law has a "disproportionately negative impact on minority farmers,’’ said Sen. Rob Bradley, R-Fleming Island, sponsor of the original legislation, which passed on the last day of the 2014 session.

Bradley has filed a new bill, SB 7066, that attempts to expedite the implementation of the law which intended for the non-euphoric marijuana to be available to families by now. But, but with every step forward, he has found a new hurdle.


The law as written has “carved out most of the small farms, not just the black farmers but the small farmers,’’ said Howard Gunn, a cattle farmer from Ocala and president of the Florida Black Farmers Association, at a meeting of the Senate Health Policy Committee. "We can’t compete with those companies. It’s a shame. It’s a travesty."

Bradley acknowledged the shortcomings of the law after Gunn and three other members of the Florida Black Farmers Association urged senators to end the discrimination embedded in the 30-year rule. But, he added, the issue could potentially create yet another hurdle to implementing the already delayed law in the House, which inserted the discriminatory language last year.

"The purpose of this bill is to end the legal challenges and to fulfill a promise we made to these families,’’ Bradley said. "Anything that strays from that purpose is going to be a problem for many of us since that is the reason we are pursing it this session."

The Florida Compassionate Medical Cannabis Act was designed to allow growers to start cultivating marijuana low in tetrahydrocannabinol (THC) and high in cannabidiol, or CBD, to respond to the demand by families of children with chronic seizures, such as Dravet syndrome, who see the CBD oil as their last-chance hope. The most well-known strain has been named "Charlotte’s Web."

But implementation of the law has been delayed by a flawed rulemaking process and protracted litigation, driven primarily by growers unhappy with the criteria established by legislators in a last-minute deal between the House and Senate last year.

Since then, the Department of Health has tried twice to write rules to implement the law only to have them challenged in court by growers or patients. The current rule is being challenged by the family of a four-year-old Jacksonville girl with inoperable brain cancer.

Bradley’s proposed legislation would expand the number of licensees to 20 nurseries and broaden the ailments covered to include multiple sclerosis, Crohn's disease, HIV and AIDS and other diseases.

The Senate Health Policy Committee voted unanimously in favor of the bill Tuesday but it faces an uphill battle in the House, where there is no companion legislation.

An amendment proposed by Sen. Oscar Braynon, D-Miami, would have removed the 30-year criteria and allow black farmers to more readily compete with other growers, but Bradley asked him to withdraw it with the promise that he would work with them.

Bradley said he is not fan of the discriminatory language inserted into the legislation last year by the House but hopes to find a resolution that "will accomplish all of these goals at the same time."

Proponents of medical marijuana also told the committee that the existing law doesn’t go far enough. They cited research that suggests that Charlotte’s Web produced mixed results in patients with severe epilepsy and urged the committee to allow doctors to proscribe the level of euphoria-inducing THC a patient needs. The law now limits the level to .08 percent, and many suggested the level be flexible, based on research.

A constitutional amendment that would allow for full medical marijuana in Florida is proposed for the 2016 ballot and legislation to enact into law a similar proposal has been derailed this session. Legislative leaders have said they want to see cultivation and distribution of the low-THC strain before legalizing broad use of medical marijuana. Bradley and other proponents also hope that more research can be done to determine the appropriate levels of THC and CBD to treat specific ailments.

Meanwhile, many large farmers have privately conceded that they prefer the delay because they do not want to grow low-THC cannabis and would prefer to wait for lawmakers to approve the more profitable, higher potency strains.

"I’m long since past trying to figure out what motivates people to file legal challenges to delay implementation of this law,’’ Bradley told the Herald/Times. "I will tell you that it’s cruel to deny these families that relief that they were promised. I sure hope that people aren’t denying implementation of this for monetary purposes." Story here.

Photo: Dr. Latresia Wilson, farmer and emergency room physician, from Ocala Florida, speaks on behalf of an amendment to let black farmers qualify to grow the low-THC strains of marijuana.