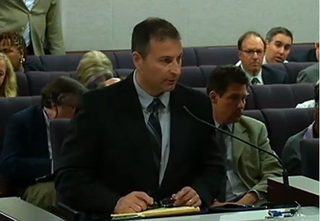 The Department of Corrections concluded that the name of an inmate should be erased from the video testimony of an whistle-blower at a Senate committee because of federal HIPAA privacy laws, an agency spokesman told the Herald/Times.

Doug Glisson, an inspector with the DOC’s Office of Inspector General, testified under oath at the March 10 meeting of the Senate Criminal Justice Committee that the agency covered up potentially negligent medical care, criminal activity and sabotaged investigations to protect high ranking officials within the organization.

Among the examples Glisson cited was the case of inmate Quintin Foust, whose death was listed as “suspicious” by the medical examiner. Glisson said Foust was “undergoing medical care” at Jefferson Correctional Institution but did not provide any details about his medical condition or ailments. He said Foust “started having seizures” and “wound up dying.”

Glisson said he and his investigator believed that a criminal investigation should have been conducted of Foust’s death but was told by “upper management at the Office of Inspector General to close that criminal case” because of a “conversation he had had with the state attorney’s office and that we would run that case administratively.”

Foust's cause of death is now listed as "natural" on the DOC web site.

Lewis then provided the time codes from the video to The Florida Channel and asked them to scrub the name references from the audio.

"The department notified The Florida Channel that some of the information released violated federal HIPAA law,’’ Lewis said. “We have a responsibility to protect the personal health information of all inmates and staff.”

Lewis told the Herald/Times that Glisson was was stripped of his investigative post in February. He now has no access to DOC records and is also being investigated for violating agency rules, possibly including the alleged HIPAA violation.

Glisson was one of four current and former DOC inspectors who testified under oath before the Senate Criminal Justice Committee. A transcript follows of his testimony -- which begins at 1:02:34 through 1:09.15 -- after Sen. Greg Evers, R-Baker, the chairman of the committee, swears him in.

Glisson: “Thank you for the opportunity to come here. I’m going to present three cases to you that I have personal knowledge of in the Inspector General’s office at the Florida Department of Corrections.

“We started an investigation into that case. What we found were multiple violations by the medical staff there at Jefferson CI. We waited on the autopsy that came back from the medical examiner that listed the cause of death as suspicious. We opened a criminal case looking into those allegations. Our investigator was proceeding with that investigation. I received a phone call from the upper management at the Office of Inspector General to close that criminal case based on a conversation he had had with the state attorney’s office and that we would run that case administratively.

“I just would argue that -- well, I did have my investigator put that in her report because it was a significant factor that we would close that criminal case simply based on a conversation and not look into those criminal charges.

“I have a second case I want to mention to you. In 2010, there was a physician that was hired at the Florida Department of Corrections. I will briefly give you the background. A physician can be hired with a temporary certificate and practice in the area of critical need. That is a known fact. However, if you’re hiring someone, particularly out of state, who has a revoked, suspended, voluntarily relinquished license, they’re automatically not allowed to practice in the State of Florida.

“There was a physician at the Florida Department of Corrections that hired this physician, knowing that the other physician from out of state had a revoked license.

“Our investigators looked into the case administratively, sustained all the medical staff there that were involved in the hiring of this physician. The case sat there from 2010 to 2012 with no action being done. In 2012, the IGs office asked them to look at that again.

“The original case was sustained on the physician that hired the other physician knowing that his license had been revoked.

“It was reviewed by our legal, our medical and our inspector general’s office. Ultimately got assigned as a case as special interest and there were no sustained charges on the physician -- even though he admitted in the investigation he knew when he hired the other physician he had a revoked license.

“The third and last case I’ll present to you is a case where we had allegations on a training center in a county. There were allegations of problems -- I’m speaking very generically because this is an open case so I’m speaking very generically. There were problems reported at this academy. Our investigator started looking into that case. The challenge he found was, it appeared from testimony that students in that class were giving, people high up in the chain -- at central office -- knew what was going on. At least that was the allegation.

“So, I said to him, send an email to the person -- the high ranking official. Let’s give him three questions and if he can answer those questions I’m satisfied they’re not involved. He answered two of them. I said, let’s list him as a subject. But I told my investigator we’re going to have problems because this was a high ranking official at DC.

“Two days later, I received a call from upper management at the Inspector General’s office that everything we needed to get, or obtain, any information, we needed to go through the very person that had been named as a subject. And again, inspectors/investigators are supposed to have unfettered access to documentation, to talk to who we want. Now we are being told specifically we go through this person who’s been named as a subject. We thought it was very inappropriate.

“I also commented to our upper management, whatever the outcome of our investigation is, it will have to go through FDLE because they have oversight of the training academies. Three or four days later, I get a call from our upper management saying the person had gone over the FDLE and talked to them and basically got a slap on the wrist. In other words, FDLE wasn’t going to look at it. That’s what we were being told.

“Those are just three examples. We have more but I just wanted to give you kind of a pattern of my personal experience in the IGs office.”

Glisson answered: “It was the state.”