It took less than 90 minutes after Annette Taddeo announced her candidacy for Congress for national Republicans to step in, marking the unofficial launch of what will be an intense race for one of the country's most competitive districts.

"Annette Taddeo is so desperate to run for office that she's now running in a district where she doesn't even live," National Republican Congressional Committee spokesman Chris Pack said in a statement emailed to reporters. "This is a new level of desperation for Taddeo, who seemingly can't kick her obsession with running for office regardless of what or where it is."

Taddeo followed her announcement, delivered via a news release, with a fund-raising appeal to suporters, telling them of her plans to challenge Republican Rep. Carlos Curbelo and asking them for money. She freshened up her Twitter profile and launched a bare-bones website.

"My story is like so many of your stories," her pitch read. "You can bet I'll use that determination to stand up for all of us in Congress."

The pitch, it should be noted, says it was "Paid for and approved by Charlie Crist." Taddeo was Crist's running mate in last year's gubernatorial race, and he is scheduled to attend a fundraiser for her in Miami on Thursday. But it's unclear why her email would be approved by him (perhaps a clerical error?). We've asked for an explanation and will update this post once we receive a response.

UPDATE: Not a clerical error: It appears that Crist gave Taddeo the email list from last year's race for her to use in her new campaign. Taddeo's camp, probably on a lawyer's advice, decided to include a Crist disclaimer on the fund-raising pitch, though other lawyers suggest that approach is unusual. Either way, Taddeo will likely have to disclose the value of the list as an in-kind contribution to her federal campaign -- and it may be difficult to determine its value. 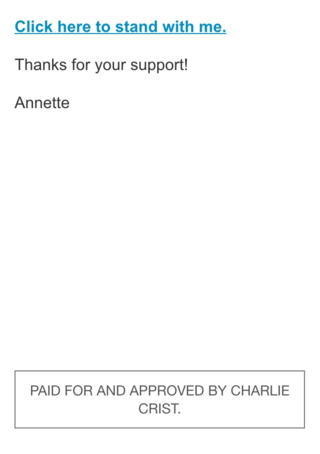