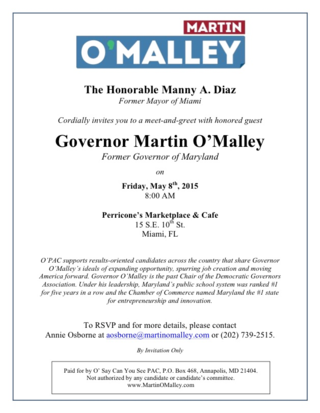 "He's not running yet, but I'll tell you, if he does run, I will endorse him," Diaz told the Miami Herald. "He's an old friend, and I'm very loyal to old friends."

Diaz praised O'Malley's work as Baltimore mayor and noted he visited him when he first got elected in Miami. Diaz ended up using Baltimore's 311 call system as a model for his own city.

"He's very data-driven, results-oriented, 'let's see how we're doing, let's measure ourselves,'" Diaz said. Plus, he has a soft spot in his heart for executives: In 2008, as head of the U.S. Conference of Mayors, Diaz said he met separately with Clinton and Barack Obama and urged them to run as "mayor of the United States."

"When you look at what mayors do, and in this case what governor's do -- and he's been both, so he's actually run something," Diaz said. "He's run two governments."

The event, organized by O'Malley's political action committee, allows people to contribute to his likely campaign effort. But Diaz said in an email to invitees that they don't necessarily need to give O'Malley money.

"As sitting Mayors, Martin and I worked closely together and have maintained a strong friendship through the years," Diaz wrote. "I would like to introduce you to my friend. No commitments. No checks. Only a cup of coffee, a handshake and a simple hello."

The breakfast is scheduled for 8 a.m. May 8 at Perricone's on Brickell.