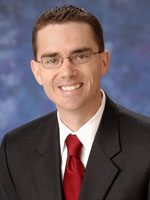 Imagine electing one of the three most powerful people in the state based on a resume, a handshake and promise.

There’s no audition for the job. You don’t get a chance to see how the prospective leader performs under stress, how he resolves conflicts, or even how he feels about many issues. But you do know his political pedigree and which lobbyists and fundraisers back him.

That’s how Florida legislators designate their House speaker – six years before they take the official vote. It’s a precarious way to run a democracy and that’s part of the reason why Rep. Eric Eisnaugle and Rep. Blaise Ingoglia are scrambling for cover this week.

Eisnaugle, an Orlando Republican, had reportedly sewn up pledges from 17 of the 19 House freshmen to become their speaker designee for 2020-2022 term -- until this week, when word got out that he’s being targeted in an attempted coup.

Rumor is that as many as six of the 19 freshmen have withdrawn their support from Eisnaugle, allegedly leaving him only 11 supporters. The suspected culprit: Rep. Blaise Ingoglia, R-Spring Hill, who was also elected Republican Party of Florida chairman in January.

Ingoglia told the Orlando Sentinel this week that he is not putting his name forth as a rival to Eisnaugle and denied rumors, first reported in the SaintPetersblog, that other freshmen Republicans supporting Eisnaugle, who live in potentially vulnerable districts, may not get party support in 2016.

But former RPOF chair Leslie Dougher called Ingoglia out in a widely-circulated letter last weekend and that was followed by a blistering scold from Orange County Republican Chairman Lew Oliver.

Eisnaugle, a red-shirt freshman, was first elected to the House from 2008-2012, then forced out because of redistricting and returned last April in a special election.

He is not talking but a top ally, Rep. Scott Plakon, R-Longwood, is.

“Blaise is running for speaker – that’s just my opinion,’’ Plakon said. “It seems to me, there’s a conflict of interest there: you are trying to unify the party on one side and then soliciting members to break their word on the other.”

Plakon, who also served in the House from 2008-2012 before redistricting, notes that relationships matter in the fragile confines of legislative politics.

“In the legislative process, your word is the most valuable thing you have,’’ he said.

Another freshman Republican and Eisnaugle ally, Rep. Bob Cortes, R-Altamonte Springs, says the episode is “blown out of control.”

“We’re going to go through all this and end up back where we stand,’’ he said.

Ingoglia is an acolyte of  Rep. Richard Corcoran, R-Land O’Lakes, who is also speaker designate for 2016-18, having been designated for the job in 2010. Corcoran is not a fan of the House’s habit of determining speakers so many years out but he is the beneficiary of it.

They all earned the “speaker-D” title when an influential group of veteran legislators cherry picked them from the incoming freshmen class and created a buzz. They then quietly campaigned on the promise of fundraising prowess, collected pledges from the incoming class, overcame challengers, and earned the special promise.

Six years after collecting pledge cards, and two years before they are term limited out, the official votes will be taken and they will be formally elected to the job.

“Clearly it could be improved,’’ he said. “But how do you get a good outcome when you start off asking members to break their word? Instead, leave us alone and work together as a caucus to get this worked out.”