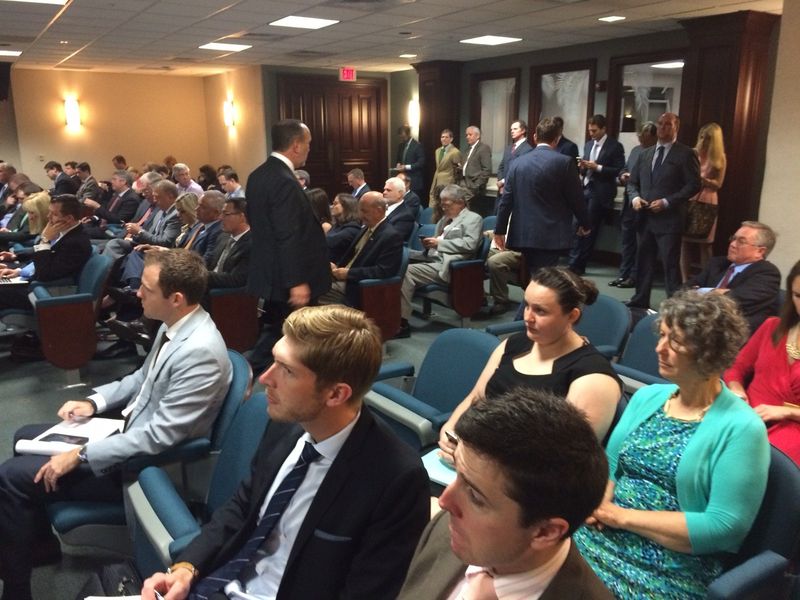 The calm in the lobbyist-packed room belied the intensity of the behind-the-scenes battle underway to end the House’s resistance to gambling expansion.

Before the Finance and Tax Committee met, House Speaker Steve Crisafulli added Rep. Jim Boyd, R-Bradenton to the committee -- an extra vote of assurance to help the bill make it through the tough committee.

As the vote looked close, lobbyists Ron Book, Brian Ballard and Sean Pittman quietly met in the corner of the meeting room with Rep. Hazelle Rogers, attempting to get the Lauderhill Democrat to end her opposition to the bill. The lobbyists represent Palm Beach and Naples tracks who have been trying for years to get slots at their tracks.

In the end, a last-minute switch by Republican Rep. John Tobia of Melbourne Beach to support the bill, and a decision by Rep. Frank Artiles, R-Miami, to miss the vote, brought HB 1233 to victory.

The vote was 10-8 for what could be the most expansive rewrite of Florida’s gaming laws in a decade, when voters authorized slot machines. It opens the door to expanding slot machines at the Palm Beach Kennel Club and the Flagler Race Track in Naples if agreed to by the Seminole Tribe in a legislatively-approved compact.

Most important for its author, Rep. Dana Young, R-Tampa, it "decouples" the requirement that greyhound tracks continue to race a minimum number of races in order to operate the more lucrative poker rooms or slots casinos and requires tracks that continue to race to report all dog injuries.

Young urged her colleagues to vote for the bill "on behalf of the thousands of racing greyhounds that are bred and live their lives to do nothing but run around a circle with no one watches."

But the measure still faces steep hurdles. The Florida Senate is awaiting a vote on its version of gambling expansion -- a plan that would also extend the compact with the Seminole Tribe for one year.

"There are ten days left in the Florida legislative session, and we are very close to a major victory for the dogs!,'' the email states. "In the next few days, the Florida House of Representatives will vote on House Bill 1233, a very important measure that will help thousands of greyhounds. HB 1233 includes two important new laws: it will decouple dog racing from other types of gambling, and also will require that greyhound injuries be reported to the public.

"Please contact your State Representative right away and ask for a YES vote on House Bill 1233."

Photo: Gaming lobbyists Ron Book and Brian Ballard leave their seats during a meeting of the House Finance and Tax Committee meeting before they meet with Rep. Hazelle Rogers at the side of the room. By Mary Ellen Klas