After he had worked a 12-hour shift Saturday working at Burger & Beer Joint on Miami Beach, Tommy Strangie, waiter and semi-retired drag queen, got a special request from his boss: Design a burger to serve Sunday to an important guest who's on the Paleo diet, which shuns dairy, starch and refined sugar.

His boss didn't tell him the guest's name. But Strangie, who about once a year still steps out as alter ego Shelley Novak, figured it was Jeb Bush.

"I don't live under a rock!" Strangie told reporters Sunday.

When Bush showed up Sunday -- pushing away beer-battered onion rings ordered by his staff for the table -- Strangie offered the former Florida governor a lettuce-wrapped bison burger with chipotle ketchup, sautéed onions and jalapeños (no bun, no cheese) and a side salad of chopped vegetables with balsamic vinaigrette. Bush said yes.

Bush treated a couple from Wisconsin to lunch to begin a two-day financial donor conference in preparation for his all-but-declared 2016 Republican presidential campaign. Zeus Rodriguez and his wife, Dana, from Milwaukee, won the expenses-paid trip to South Beach as part of a contest organized by Bush's political action committee and campaign in waiting, Right to Rise.

“I personally have been a fan of Gov. Bush for many years, specifically due to his work in education reform and how it’s positively affected a lot of families that are very underserved in Latino communities,” said Zeus Rodriguez, who heads Hispanics for School Choice, a nonprofit that supports taxpayer –funded subsidies for children to attend private and religious schools.

“And I really like his holistic approach to the campaign,” he added.

“What campaign?” Bush said with a smile, putting his arm around Rodriguez.

Bush remains an undeclared presidential candidate -– a role that allows him to continue to raise oodles of political money without restrictions and public more-frequent disclosures that kick in with a formal candidacy.

More than 350 benefactors are expected to descend on the newly opened 1Hotel –- where rooms studded with yoga mats and organic linens can go for more than $700 a night –- to mingle with each other and with Bush's top advisers as part of the donor conference. A late-night party was scheduled for Sunday night, and various panel discussions for Monday.

“I don’t think you need to spend a billion dollars to be elected president of the United States in 2016,” Bush said. “I don’t think it’s necessary if you run the right kind of campaign. You don’t need to have these massive amounts of money spent, but in order to be competitive, you have to raise a significant amount of money to build a first-rate policy team and a great campaign.”

If he actually runs, “I’m going to make every effort to reach thousands and thousands of people and ask them to contribute,” he added.

But first, Bush, who lives in Coral Gables, got a taste of the South Beach experience. He didn't drive himself to the restaurant for lunch, so he avoided parking headaches. However, it would have been difficult for him to miss the putrid stench permeating the streets from sewage waters that rise with the tides -- and with the worsening rising seas -- and spill onto the pavement and sidewalk.

He also met Strangie, the waiter who still hosts an annual drag queen awards show -- the Shelley Novak awards, which he described as mock Oscars for South Beach drag queens -- and sometimes gets asked to MC events such as hotel bingo nights. Drag, he lamented, “is a young man’s sport.”

Though he snapped cellphone photos of other wait staff with Bush, Strangie didn't jump into any of them. "I’m going to wait for my pictures with Hillary," he said, praising Hillary Clinton’s push to reform the healthcare system under her husband Bill Clinton’s presidency.

“I don’t know the first thing about politics,” added Strangie, a 25-year South Florida resident who noted he didn’t know if or when Bush had been Florida governor. “I just feel that, health-wise, she has my back.”

Still, Strangie, who said he’s met celebrities from George Harrison to Madonna, had nothing but praise for Bush.

“He was very nice and very down to earth –- and a great tipper,” he said. 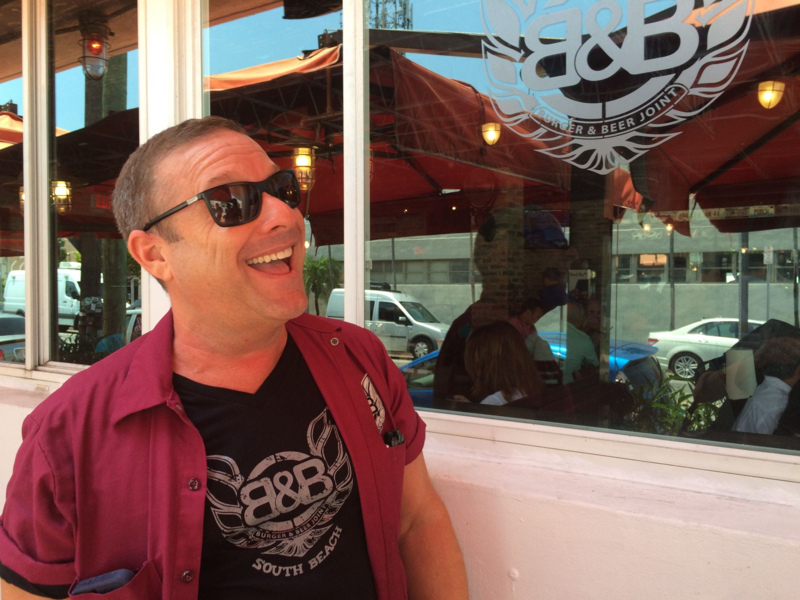