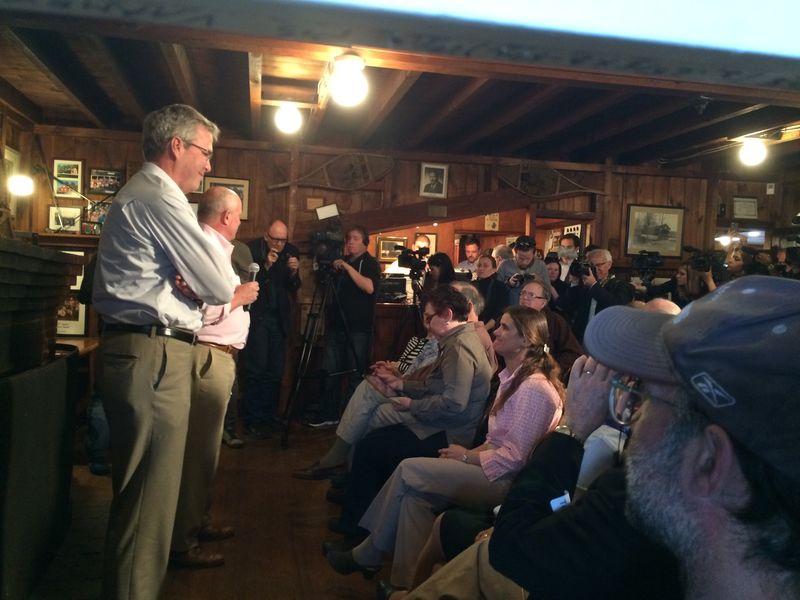 Bush commiserated with Republican voters -- and enjoyed a piece of blueberry pie, breaking his ongoing paleo diet -- Thursday evening at a clubhouse on the outskirts of New Hampshire's state capital. Then he took questions from reporters, including one about what how the Florida Legislature and Gov. Rick Scott might overcome a stalemate over funding hospital charity care and expanding Medicaid.

The standoff has effectively halted the annual lawmaking session, with no state budget deal in sight. Scott said Thursday he intends to sue the Obama administration over its threat to withhold federal funds for hospitals that treat the poor.

Bush hadn't heard of the yet-to-be-filed lawsuit, but suggested all sides sit down and find a solution.

"The feds and the executive branch and representatives from the House and Senate ought to get together and try to forge a compromise," he said.

But would such a compromise involve expanding Medicaid, as proposed under the Affordable Care Act and rejected by the GOP-controlled Florida government in the past?

"I don't know," Bush said. "That's their job, frankly. Expanding Medicaid without reforming it is not going to solve our problems over the long run." Bush's spokeswoman told the Miami Herald on Friday that he opposes Medicaid expansion.

On Thursday, Bush touted reforms begun while he was governor that turned over control of Florida's Medicaid program to managed-care companies. He told voters gathered for a "Politics and Pie" event that the federal government should allow states to innovate on Medicaid to better fit their needs.

"We need to reform Medicaid, and there's a plan to do that in Florida that's a pretty good one, so if it was part of that, and there are trade-offs and all that stuff -- that's how you get past an impasse," he later told reporters.

This post has been updated to include Bush's spokeswoman.