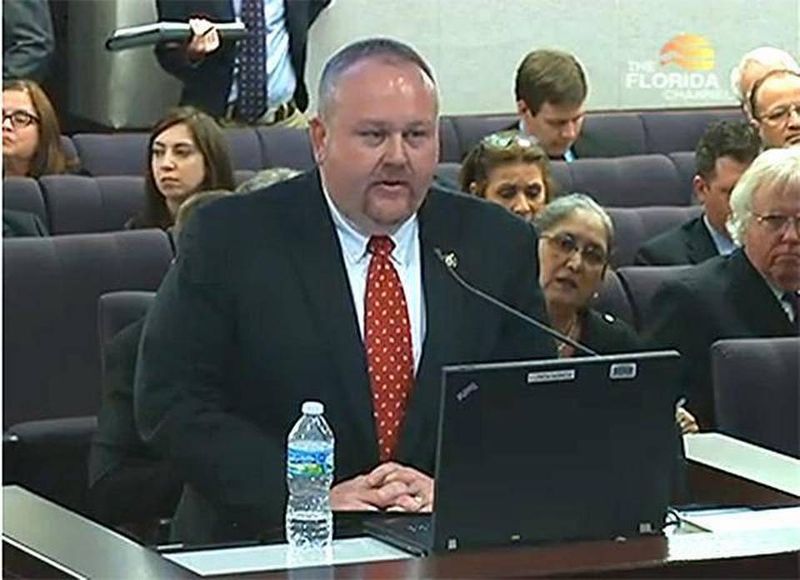 A House committee took aim at the state’s chief prison inspector Tuesday, first accusing Jeffery Beasley of failing to properly investigate suspicious inmate deaths, then approving a plan to make it easier for the Department of Correction’s secretary to fire him and his staff.

"We have inmates that are being scalded to death in Miami Dade County; inmates that are being pepper-sprayed and murdered, and nothing is being done about it,’’ said Rep. Carlos Trujillo, R-Miami, referring to a series of reports in the Miami Herald, at a meeting of the House Judiciary Committee on Tuesday. "Ask yourself, why is this happening?"

But DOC Secretary Julie Jones, who has been defending Beasley for months, continued to support her top investigator but acknowledged he should leave the job.

"Given the perception of all of the issues associated with the IGs office, I agree we need to make a change ultimately in leadership and structure in the IGs office,’’ she told the Herald/Times.

The mission of the inspector general’s office is to "protect and promote public integrity" and root out corruption in the department that has been buffeted by investigations by the Florida Department of Law Enforcement, the statewide prosecutor, the FBI, and the recent arrest of two current corrections officers for allegedly planning the murder of a former inmate.

The House and Senate have proposed separate bills that increase oversight at the agency. The Senate plan, SB 7020, proposes an independent oversight board with a small full-time staff while the House bill, HB 7131, create five regional boards, each staffed with DOC employees.

While Trujillo wants Beasley removed immediately, Jones said she wants to wait until later in the year to give him time to complete investigations that she says will show his leadership at the agency is "not as bad as it would seem."

Trujillo, the sponsor of the House prison reform bill, noted that Beasley and his office have a history of dismissing claims and avoiding prosecutions when faced with allegations of abuse and official corruption.

He blamed the close-knit agency hierarchy for allowing investigators to be promoted "not based on merit but based on cronyism." And he said it is unrealistic to expect inspectors who first worked for prisons, relied on the prison wardens for promotions to investigate "their softball team teammates" and their "counterparts and buddies."

Trujillo blasted the reports produced by the inspector general’s office as inadequate and incomplete because they failed to hold bad actors accountable for "killing people."

The amendment would remove all employees of the inspector general’s office from the state career service system, allowing them to be hired and fired at will. Under current law, the employees must undergo a lengthy administrative proceeding before they can be dismissed for cause.

But Rep. Jose Javier Rodriguez, D-Miami, warned that the amendment could have the opposite effect by shielding those who are complicit in corruption while allowing the secretary to fire those that blow the whistle on them.

Christina Bullins, a former probation officer who has sought whistleblower protection after she was fired for attempting to call attention to the gasing death of inmate Randall Jordan-Aparo at Franklin Correctional Insitution, agreed that the wrong people could be targeted by Trujillo’s bill.

"The first inspectors that will be released will be the disgruntled inspectors,’’ she said. "I would like to see an inspector general’s office where good men and women find that’s a safe haven."

Trujillo told the Herald/Times that “the goal is in no way to go after the whistleblowers.”

“I think those are the people that are bringing light to a lot of shortcomings in the situation,’’ he said. “And if the secretary or the inspector general is going after them in a retailiatory fashion, that’s something we have to hold them accountable for.”

State Sen. Greg Evers, R-Baker, the sponsor of the Senate prison reform bill, said he has also lost confidence in the ability of Beasley to root out corruption at the agency and warned that the investigations and lawsuits Jones wants him to work on "will continue to mount unless new leadership is involved."

Another amendment adopted by the House Judiciary Committee would create a pilot program to give body cameras to officers at Union Correctional Institution – one of the prisons with the highest history of use of force in the state. The officers would be required to wear body cameras every time they use force against an inmate. The cost to the state would be $124,000 and video would be archived in a cloud-based server, and would be subject to the state’s public records law, Trujillo said.

Rodriguez warned, however, there was nothing in the bill that would penalize prisons for failing to record all use-of-force encounters with inmates or allow supervisors to dictate what gets recorded.

"Body cameras could simply be used as a compliance tool and turned off and on at their direction,’’ he said.

Trujillo countered that the goal of the pilot program is "to put cameras in to capture the entire day and the transgressions of inmates and see if the cameras change behavior, or maybe they don’t."

The House bill also requires a review of all hiring practices, employee retention policies, and employee training, Trujillo said. It requires that the state create five regional oversight boards, staffed by state employees whose terms would last no more than four years.

Meanwhile, Jones said she is working on providing her own additional oversight of her agency with a series of recent changes. Among them is a plan to centralize the discipline of excessive and unjustified use-of-force, removing it from the prisons to a panel of agency executives in Tallahassee who have, in some cases, recommended firing people rather than putting them on administrative.

She is also implementing a plan to add a psychiatric screenings for people who apply to work as corrections officers, acknowledging that "this sort of work has the potential to draw some people who should not be working for us."

Finally, Jones said, she is planning to replace the contract that provides inmates MP3 audio players with one that provides them scaled down tablets, that will allow them limited access to email and Skype with family members, access to thousands of online instructional courses and allow them to file grievances electronically.