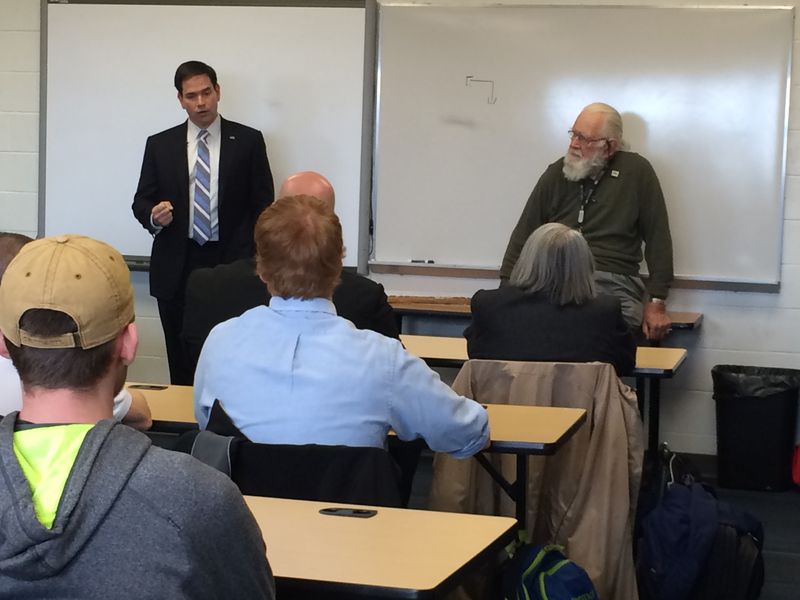 So when Presidential Candidate Rubio made his way Friday to Manchester Community College in New Hampshire, he was ready to make quips and ask questions of students who, in at least some cases, had no idea who he was.

He gave a snippet of his fledgling stump speech, advocating for a higher-education system more flexible for working parents and more attention to vocational and technical education. Universities should tell students in advance how much they can expect to make once they graduate, he added, so graduates don't face student-debt sticker shock.

"That's something I'm very sensitive to, because I actually owed over $100,000 after I finished my education," Rubio said. "And I never would have paid it off had it not been for a book I wrote -- which you can get in paperback," he joked.

The students needed a little prodding to get going with questions. One of them, in wearing sweatpants and a sweatshirt, apologized for his casual attire. Rubio, wearing a suit, didn't miss a beat: "I want to apologize for how I'm dressed!"

On his way out the door, he thanked history professor Ben Hampton for letting him interrupt his class. Hampton, as it turns out, hails from Fort Lauderdale and knows Spanish.