Senate Democrats to Supreme Court: Bring the House back into session 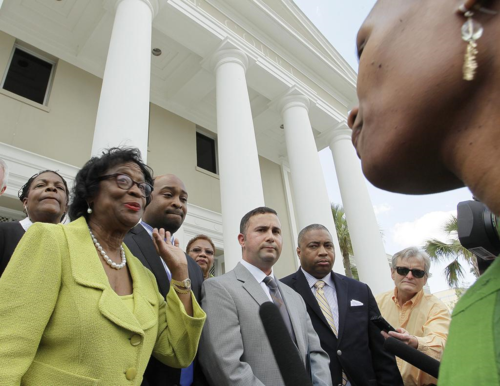 Senate Democrats filed an emergency motion in the Supreme Court on Thursday seeking to have the Florida House ordered back into session.

But Senate Democratic Leader Arthenia Joyner, of Tampa, said the House had violated the state Constitution by calling it quits before the clock ran out.

"It's not OK with us," Joyner. "The same men who make the laws should be compelled to obey them."

Joyner said she was hopeful the court would rule quickly -- and hold state representatives in contempt if they refused to return Friday afternoon.

Democrats weren't alone in their belief that the House had violated the Constitution.

Republican Senate President Andy Gardiner expressed similar concerns Wednesday and said he would ask the Supreme Court for an advisory opinion on the matter.

But Joyner said she and her fellow Democrats felt a need to take it a step further.

She did not seek permission from Gardiner, she said.

Instead, Joyner told the president she was "going to take some action," she said.

Senate Appropriations Chair Tom Lee, R-Brandon, said the Democrats acted on their own.

"I think this was a little bit of a surprise, not to say that Sen. Joyner didn't tell the president," he said.

The Democrats are pointing to a provision in the state Constitution that says "neither house shall adjourn for more than 72 consecutive hours except pursuant to a concurrent resolution" signed by the two chambers.

"Our forefathers put that in for a reason: So that one body in the chamber does not dominate another body," said Sen. Darren Soto, D-Orlando, adding that he was concerned about the "dangerous precedent" the early adjournment would set.

But Joyner said she would support "whatever it takes to get them here."

House Budget Chairman Richard Corcoran, a Land O'Lakes Republican who was driving back to his district Thursday afternoon, wasn't ready to turn around just yet.

"I have serious doubts that the court will delve into that issue," he said.

Photo by Scott Keeler of the Tampa Bay Times.