« The other Rick -- Perry -- will be politicking in the Panhandle | Main | A pay raise for state workers? Not so much »

Senate passes prison oversight but battle ahead remains in House 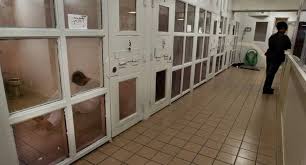 Responding to allegations of abuse and corruption in Florida’s prison system, the state Senate voted Wednesday to create an independent oversight commission with subpoena powers to investigate wrongdoing at the state Department of Corrections.

The bill, SB 2070, passed the Florida Senate 37-1 and creates the nine-member Florida Corrections Commission, which would have the power to investigate allegations of corruption, fraud and inmate abuse, as well as review budget proposals and make policy recommendations.

The proposal comes in the wake of months of reports about suspicious inmate deaths, allegations of cover-ups, and claims by whistleblowers that its chief inspector general has sabotaged investigations and ignored inmate abuse.

Seizing on the reports, Senate Criminal Justice Committee Chairman Greg Evers, R-Baker, conducted surprise inspections at several prisons and pushed for the sweeping reforms. The oversight commission was championed by Sen. Rob Bradley, R-Fleming Island, "lost trust" in the ability of the $2 billion agency to police itself.

The Senate also began debate on its budget, which includes $6.9 million to pay for the oversight commission and $15 million to fill the long-held deficit in the prison budget.

"Members, this was your bill,’’ Evers told the Senate, before the near unanimous vote. Only Sen. Audrey Gibson, D-Jacksonville, voted against it. "Each one of you have had input and I appreciate the support that you have given me in passage of this great bill."

Senate President Andy Gardiner, R-Orlando, commended Evers for legislation that provides "the key oversight necessary to implement critical programs to protect inmates from mistreatment, to strengthen the security of our prison system, and to keep Florida communities safe."

But the measure faces an uphill battle in the House, which has proposed a watered down prison bill that includes none of the added oversight, inspections or the independent commission. It also faces a potential challenge from Gov. Rick Scott, who has remained silent on the prison troubles as his agency secretary, Julie Jones, has blamed lack of funding and a few “disgruntled employees” for the allegations.

House Speaker Steve Crisafulli, R-Merritt Island, and Rep. Carlos Trujillo, R-Miami, said Wednesday they now are prepared to seek a middle ground, such as an alternative to the oversight board that holds the agency accountable.

Crisafulli said he is supportive of creating a series of regional oversight boards, rather than a single statewide board. Trujillo said he is considering strengthening the role of the Florida Department of Law Enforcement to independently investigate all homicides, suicides and suspicious inmate deaths and remove the DOC Inspector General from the ability to influence those investigations.

"FDLE should not be rubber-stamping these investigations,’’ Trujillo told the Herald/Times. Trujillo also wants all deaths to be handled by an independent medical examiner without access or influence from the DOC.

"There isn’t a silver bullet that will fix years of mismanagement but these are two huge steps,’’ he said.

Under the Senate plan, the governor would no longer have sole authority over DOC, the largest agency in state government. Future DOC secretaries would be appointed by the governor and require the consent of the independently-elected Cabinet.

The nine-member oversight commission would provide an added layer of scrutiny with members from different regions of the state. The board would have a budget and professional staff, would begin as soon as October 2015 and could conduct unannounced inspections of all prisons, including those operated by private prison contractors.

It would have the power to issue subpoenas, do regular "security audits" -- focusing on the institutions with the most violent inmates -- and would even monitor video cameras, to determine whether there are blind spots intended to shield areas from view.

The bill imposes penalties on employees caught using inappropriate force against inmates, requires more frequent reports about the performance of private medical companies and attempts to prevent retaliation against those who speak up.

Inmate healthcare also would come under increased scrutiny, as the oversight board would have the ability to monitor medical reports, and families of inmates could pay for independent medical exams that the private providers would be required to recognize.

Since the state turned over inmate healthcare to two private prison vendors, Corizon and Wexford, complaints of medical neglect and poor treatment have increased and are believed to be contributing to the record number of inmate deaths.

The bill also would provide non-violent, elderly inmates the opportunity to be eligible for special medical leave, and inmates who are military veterans would be given special housing options.

Five whistleblowers have filed lawsuits against Inspector General Jeffery Beasley and the department for allegedly retaliating against them for claiming there was possible criminal wrongdoing and cover-up in the gassing death of Randall Jordan-Aparo at Franklin Correctional Institution.

But the bill leaves leave in place the structure of the inspector general system, which allows the office that is supposed to investigate wrongdoing, corruption, fraud and abuse within the department to report to the same officials he is assigned to investigate.