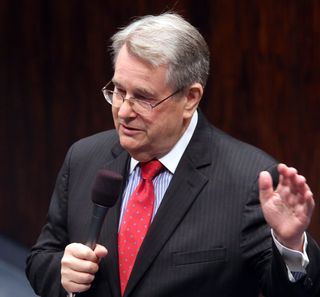 A Senate proposal expanding services for children with unique abilities may have virtually no chance of becoming law this year, but the Senate passed the bill anyway and sent it to the empty Florida House of Representatives.

The bill (SB 602) was a top priority for Senate President Andy Gardiner, whose son Andrew has Down Syndrome. It would have expanded the Personal Learning Scholarship Account program, which provides $10,000 scholarships to children with special needs. The money can be used for tutoring services, various types of therapy and college tuition, among other things.

The Senate could have voted on version of the bill amended by the House -- and sent it along to Gov. Rick Scott. But Sen. Don Gaetz, R-Niceville, took issue with a provision that would have allowed about $300 to be deducted from each child's award and given to the organization that runs the program as an administrative fee.

Gaetz said the House language did not "meet [Gardiner's] moral standard" -- the Senate version of the bill made it clear that the administrative fee could not come from student scholarships -- and slammed the organization, Step Up for Students.

Gaetz conceded that it would be impossible to pass the Senate language with the House having already adjourned. But he called for a vote on it anyway, and added provisions from other Senate bills aimed at helping adults with unique abilities. The additions included a plan to create post-secondary opportunities and financial literacy programs for people with developmental disabilities.

Gaetz noted that all of the measures were part of the joint work plan that Gardiner and House Speaker Steve Crisafulli agreed on at the start of session.

Step Up for Students later released a statement pointing out that the organization had raised $900,000 in private funds to help start the program last year.

"We fully support President Gardiner’s goals for expansion and do not want any administrative cost for this program –- whether for a state agency or a nonprofit scholarship organization –- to come at the expense of scholarship families," President Doug Tuthill said. "Unfortunately, Step Up is not in a position, financially, to be able to continue to raise the administrative funds privately, and we shared that information with Senate and House leaders."