« A pay raise for state workers? Not so much | Main | After Jeb Bush and Marco Rubio praised Indiana's RFRA, a closer look at the law » 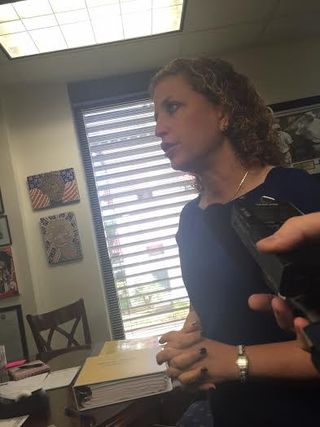 As the state House and Senate considered their respective budget proposals on Wednesday, two of Florida’s top Democrats traveled to Tallahassee to keep the pressure on lawmakers to expand Medicaid.

U.S. Rep. Debbie Wasserman Schultz, who also chairs the Democratic National Committee, said she had "direct conversations" with federal health care officials -- and that Florida shouldn't expect to have the $2.2 billion Low Income Pool program renewed unless it expands Medicaid.

"They are already very seriously looking at whether LIP should be extended at all," Wasserman Schultz told Senate Democrats. "It is certainly less likely that it would be extended if Medicaid is not expanded, and obviously that would be devastating."

U.S. Sen. Bill Nelson said he, too, was doubtful that the federal government would continue funding LIP. He said he met with House Speaker Steve Crisafulli, R-Merritt Island, on Wednesday to make that point.

"At this late hour, HHS will work with the legislature on a transition on LIP, but not where you just fund LIP and don't take what's been offered," he said. "The day of reckoning is here."

The Democrats struck a different tone than state Sen. René García, R-Hialeah, who on Tuesday met with representatives from the federal Centers for Medicare and Medicaid Services in Washington. Garcia pitched the federal health officials on a Senate plan to develop a successor plan to LIP, and said he had received positive feedback.

The trip drew sharp criticism from the House on Wednesday. House Health Care Appropriations Subcommittee Chairman Matt Hudson said he had not had a conversation with the federal government “because frankly, it is not [his] responsibility to do so."

"The responsibility of negotiating falls squared upon the Agency for Health Care Administration, the executive branch,” Hudson said.