After tough week, a warm Miami embrace for Jeb Bush 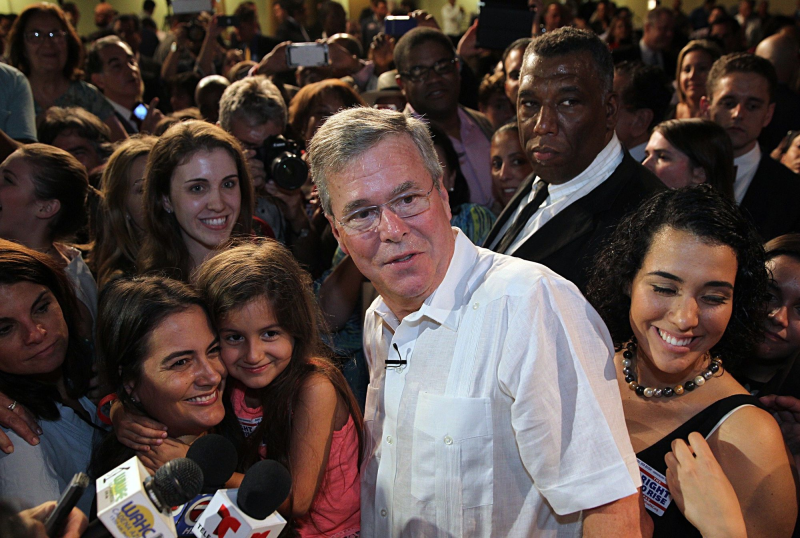 Jeb Bush felt the welcoming embrace of Miami on Monday as he tried to put behind him a difficult week of campaigning without yet being a presidential candidate.

His political action committee, Right to Rise, held a political fund-raiser in the overwhelmingly Hispanic, working-class suburb of Sweetwater, where the former Florida Republican governor was greeted as a old friend in need of a little TLC.

"Aquí está la vieja guardia -- no tan vieja," Bush joked in Spanish after being introduced by former U.S. Rep. Lincoln Diaz-Balart. The old guard is here -- not that old. (Not all of it was there: The two other co-hosts, Reps. Mario Diaz-Balart and Ileana Ros-Lehtinen, were stuck on Capitol Hill. More than 500 people RSVP'ed for the event, according to a Bush spokeswoman.)

Last week, Bush took heat for repeatedly bumbling a response to a question about the 2003 Iraq invasion authorized by his brother, former President George W. Bush.

There was no mention of the incident Monday from Jeb Bush during his brief speech to the crowd, who had paid $25 each to attend -- a pittance compared to receptions that have asked donors for six-figure checks.

He took the stage at the Jorge Mas Canosa Youth Center with his wife, Columba, and their youngest son, Jeb Bush Jr. Neither gave remarks. But the intensely private Columba Bush, who has been stepping out at more public appearances and last week joined social media, beamed at her husband as she stood by his side. She wore an unofficial "Jeb Bush" button on her lapel.

Clearly at ease among longtime supporters, Bush talked at more length than usual about his grandchildren -- they call him "Gampy" and his wife "Abue," for abuela -- and talked about working across political-party lines to build consensus and solve big problems.

"We can fix our broken immigration system so people can come out of the shadows," he said, highlighting an idea popular in diverse, blue Miami-Dade County but not so much in some early GOP primary states.

When he asked the crowd, as has become routine in his appearances, about which countries have better relationships with the U.S. under President Barack Obama, the exile-heavy audience quickly responded, "Cuba!"

"No!" the crowd roared back.

Once he was done, the mass of people surrounded him for hugs and selfies, a pack of cameras encircling them. He offered no question-and-answer session to reporters. When one asked him outside whether he would commit troops to Iraq if he were to become president, Bush responded, "I'm not committing anything, and I'm not a candidate." 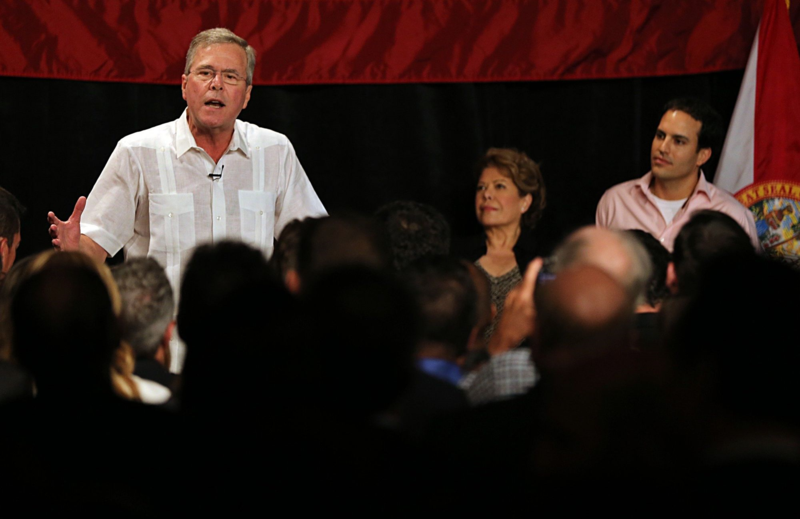