Columnist Carl Hiaasen: Everyone knows Jeb Bush is a candidate

The following words were actually spoken last week by Jeb Bush’s non-campaign spokesperson: “Governor Bush is actively exploring a run. He has not made a final decision.”

Every grownup in America knows this is a lie.

The voters know Jeb has already decided to run for the White House in 2016. Campaign donors know he’s running. And the entire busload of other Republican presidential candidates knows he’s running.

Two campaign-finance watchdog organizations, the Campaign Legal Center and Democracy 21, want the U.S. Justice Department to investigate the “charade” of Bush’s non-campaign. They say it’s merely a weasel move that allows him to rake in unlimited, and mostly unregulated, donations.

By pretending he hasn’t made up his mind, Jeb can personally go out and raise many millions of dollars for his super political action committee, loftily named “Right to Rise.”

The funds taken will eventually be used for his TV and digital advertising, once the fake non-campaign becomes an acknowledged one.

Fittingly, the logo of the Right to Rise super PAC features an open hand reaching upward. This might as well be Jeb’s hand, waiting to be stuffed with money.

WASHINGTON -- On a spring day that felt more like the thick quilt of summer, Michael Calicchio was in a wheelchair, slowly approaching the World War II memorial, a majestic statement of gratitude for the service of the greatest generation.

A Merchant Marine who went to war as a teenager, the 90-year-old wore dark brown suit slacks with black lace-up, hard-bottom shoes because this moment, this final act of paying respect, demanded the dignity of formal attire.

“No dungarees,” he had insisted to a nurse the day before this journey to Washington, D.C.

Slowed by the march of time and now aided by wheelchairs and canes, a group of 65 local World War II and Korean War veterans visited the memorials that mark their military service on Saturday as part of the Honor Flight South Florida, one of the “hubs’’ of a national network offering all-expense-paid trips for veterans to the nation’s capital.

“The war was very, very bad. A lot of people died, but we ended up freeing the world,” said Calicchio who retired as a captain at age 65 and now lives in Key Largo. “All the people who died, they are the real heroes.”

The last mission, as Honor Flight calls it, allows those who served to visit the memorials — many for the first time.

The lost soldiers of Florida's most powerful hurricane

Just inside Woodlawn Cemetery off busy Eighth Street, across from an AutoNation Nissan dealership, a granite monument marks the final resting place of 79 U.S. soldiers buried in a mass grave after one of the worst hurricanes to ever strike U.S. shores.

The marker, erected by a Miami American Legion Post, is dedicated to “our comrades ... lest we forget.”

Yet that’s what has happened in the nearly 80 years since the 1935 Labor Day Hurricane struck the Florida Keys. No marker names the fallen, buried in five narrow trenches overlooking a road and a trailer park. Only five have headstones. More flags fly over the AutoNation than at the vets’ grave.

At the time, their deaths were a national humiliation — soldiers sent to a mosquito-infested rock during hurricane season to work for the government only to be abandoned once the inevitable storm arrived.

“Ignorance has never been accepted as an excuse for murder or for manslaughter,” Ernest Hemingway wrote in the days after the storm, when no one could explain why American soldiers on American soil were left waiting for a rescue that never occurred.

With yet another hurricane season starting Monday, the Labor Day storm serves as a reminder of the nightmare power of a Category 5 storm. The looming anniversary may be the last significant milepost for the storm’s few remaining survivors. And for two aging vets wrestling with Washington and military bureaucracy to recognize the dead, it might also finally mark the end of a frustrating effort to honor men mistreated not once, but twice, by the country they served.

“To me it’s a scandal,” said Richard Bareford, a retired U.S. Army major who lives in New Jersey and joined Upper Keys historian Jerry Wilkinson in the fight to obtain individual grave markers. “This was a great tragedy. But the story isn’t over yet.”

Will other GOP presidential hopefuls ignore Florida primary to Jeb vs. Marco?

Leave it to Florida to host the best political soap opera of the presidential campaign.

The mega-state that all but delivered the Republican nomination to Mitt Romney in 2012 and John McCain in 2008, likely won’t reprise that role again because as many as two dozen states will weigh in before Florida. But the March 15 Sunshine State primary is shaping up as potentially spectacular theater nonetheless.

Two Florida favorite sons, longtime friends, mentor and protege, near neighbors in Miami-Dade facing off in America’s most important battleground state. What many viewed as almost unthinkable a few months ago — Rubio beating Bush among Florida Republicans — no longer seems far-fetched.

Other leading candidates already are pondering whether even to compete in Florida’s primary.

“I don’t think there’s a state out there we wouldn’t play in — other than maybe Florida, where Jeb Bush and Marco Rubio are in some of the polls essentially tied, and they are going to eat up a good amount of that financial advantage that Gov. Bush is going to have,” Wisconsin Gov. Scott Walker said on Laura Ingraham’s radio show last week.

A new Bloomberg Politics/Des Moines Register Iowa Poll shows more than a third of likely Republican caucus participants say they would never vote for Bush—one factor in a new index to assess candidate strength in such a crowded field. Forty-three percent view him favorably, compared to 45 percent who view him unfavorably.

Walker is backed by 17 percent as the state enters a busy summer of candidate visits, a planned straw poll, and campaigning at the Iowa State Fair. Tied for second are Senator Rand Paul of Kentucky and retired neurosurgeon Ben Carson at 10 percent, with Bush and former Arkansas Governor Mike Huckabee next at 9 percent each.

Jeb Bush on Face the Nation: 'I hope I'm a candidate in the near future'

In his last day hosting CBS News' Face the Nation, Bob Schieffer pressed former Florida Gov. Jeb Bush on his will-he-or-won't-he status as an undeclared presidential candidate who's already raising tens of millions of dollars and campaigning across the country. His unofficial candidacy has drawn a stream of complaints from watchdog groups.

Bush insisted he has yet to make a final decision on his 2016 Republican candidacy but acknowledged one is coming soon, likely after his June trip to Germany, Poland and Estonia.

"I hope I'm a candidate in the near future," Bush said in the interview, taped Saturday in Nashville.

Here's a transcript of their exchange, as provided by CBS News.

Continue reading "Jeb Bush on Face the Nation: 'I hope I'm a candidate in the near future'" »

Sen. Marco Rubio will not participate in the Iowa Straw Poll, his campaign team confirmed Saturday.

Alex Conant, communications director for the Rubio campaign, cited financial concerns, stating, “We are running a lean campaign, so we will only spend money on contests that award delegates.”

BALTIMORE -- Martin O’Malley formally launched his bid for the Democratic presidential nomination Saturday in the sun-drenched heart of the city he once led. But Baltimore today confronts an image far different than the one O’Malley left behind when his term as mayor ended eight years ago.

The city has been rocked by killings and riots and has become a national symbol of urban turmoil and despair.

O’Malley, 52, Saturday confronted the controversy as he has since parts of West Baltimore erupted in protest last month over the death of Freddie Gray, an African-American man who died in police custody.

Critics charged his anti-crime policies alienated that constituency. O’Malley vigorously disagreed, and spent a good chunk of his address Saturday addressing the concerns. 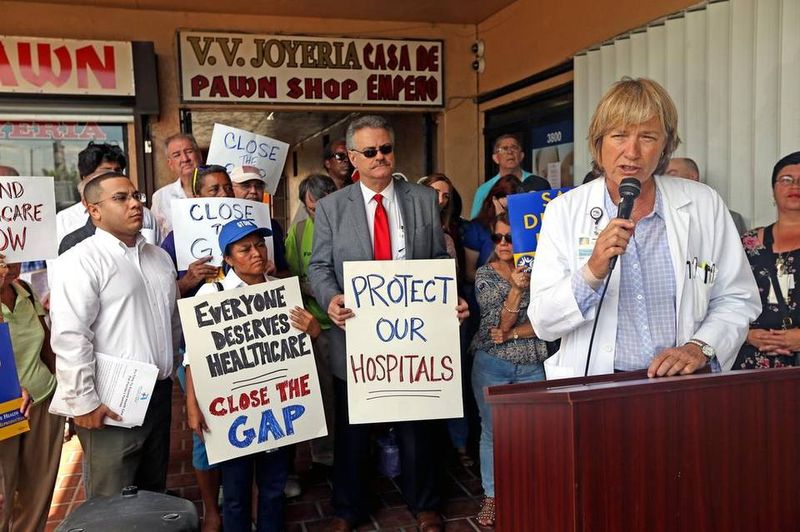 For the first time in 12 years, Florida ended its regular session without a state budget, prompting legislators to reconvene — starting Monday — to finish the work.

But in a fitting nod to the atmospherics, the opening day of the three-week special session is also the official opening of the hurricane season — and the health care debate that sidetracked the state’s $80 billion budget debate continues to spawn political storms.

As of Friday, legislators did not have agreement on the size of the health care-induced budget hole, which means they can’t start budget negotiations. They don’t agree on how to craft a long-term fix to provide health insurance to the uninsured.

They agree tax cuts are good. But, because of the health care conflict, they don’t agree on how much they can afford this year. And the question of how much money to direct to Amendment 1, the water and land-buying initiative approved by 75 percent of voters last fall, is mired amid discord over whether to use it to buy land to clean the Everglades.

“We know how to get this done from where we are. It just may require a lot more compromise," said an optimistic Sen. Tom Lee, R-Brandon, the Senate Appropriations Committee chairman.

Rep. Richard Corcoran, R-Land O’Lakes, House Appropriations Committee chairman, believes there is middle ground. “We’re all in agreement we’ll get a budget," he said. “What we don’t agree on is how much flexibility to give each side to get there.”

The session begins at 1 p.m. Monday. The House will begin by scheduling a hearing on the Senate’s health insurance reform plan called the Florida Health Insurance Exchange, or FHIX — something it refused to do during the regular session.

Photo: Petitioners gather last week outside the office of Rep. Jose Oliva, the Miami Republican whose districts includes some of the highest number of uninsured in the state.

Slot machines could be coming to several Florida dog and horse tracks if a far-reaching court ruling holds.

A Florida appeals court Friday ordered state regulators to award a license for slot machines to a north Florida facility located west of the state Capitol.

The First District Court of Appeal ruled by a 2-1 margin that the state improperly denied a slot machine license to a horse track located in Gretna in Gadsden County.

The court said the license should have been granted because Gadsden voters approved a referendum authorizing slots.

The ruling could have a wide impact because voters in several other counties including Lee, Brevard and Palm Beach have approved similar referendums.

State regulators had turned down the slot machine request due to a legal opinion by Attorney General Pam Bondi.