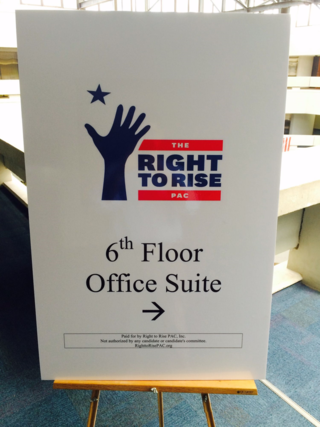 There’s no “Jeb Bush for President” sign — at least, not yet — outside the sturdy, six-story office building on West Flagler Street. But inside, the former Florida governor’s political team has begun to organize his likely 2016 Republican presidential bid.

Bush’s political action committee, Right to Rise, recently leased space on two floors of the Flagler Corporate Center at 9250 W. Flagler St. in West Miami-Dade County. For now, they remain a campaign headquarters in need of a campaign, since Bush has yet to formalize his candidacy.

“Welcome,” reads a placard with Right to Rise’s logo on it inside the building’s lobby, past a security desk that asks visitors to sign in and provide identification before they walk in. Two more Right to Rise signs point to the PAC’s offices on the fifth and sixth floors.

As an unofficial candidate, Bush has been raising big money at events hosted by his PAC and super PAC, both named Right to Rise. Once he launches his campaign, Bush will be limited in his ability to coordinate with the deep-pocketed super PAC, which is nevertheless expected to take an unprecedented role in the race, though it won’t be physically housed with Bush’s operation.

Bush’s communications staff and some of his finance team have already moved into the newly leased Miami headquarters. Team Jeb has only leased a small portion of the building. But it seems ready to house a large operation: It has ample parking and an atrium cafeteria. A large American flag hangs over the fifth-floor balcony.