« Jeb Bush on same-sex marriage: 'This has been accelerated at a warp pace' | Main | Jeb Bush's claim about leaving 10,000 troops in Iraq under Obama »

Marco Rubio has listed himself as 'white' instead of 'Hispanic.' News flash: He's both. 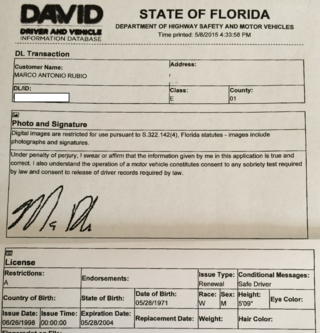 Marco Rubio has listed himself as "white"  instead of "Hispanic" in applications to renew his Florida driver's license, according to records obtained by the Miami Herald.

That might sound a little like Rubio made a mistake akin to when Jeb Bush incorrectly checked off "Hispanic" in his Miami-Dade County voter registration. But it's not.

Here's why: Rubio is white. He's also Hispanic. And being forced to pick between the two is a false choice.

Most government forms, however, are not enlightened enough to discern between a person's race and their ethnicity. When the Florida Highway Safety and Motor Vehicles Department asks license applicants to fill out an optional race field, the choices are Asian, Black, Hispanic, Native American, Other and White -- as if a person couldn't be more than one of those things at the same time.

The information isn't mandatory -- it doesn't appear on a driver's license card -- and some of Rubio's transactions with the HSMV over the years don't list any race. His 1998 and 2004 renewal applications list "white," as shown in the partial 1998 application above (the Miami Herald redacted Rubio's license number as a courtesy; other information was redacted by the HSMV). His latest renewal, from 2014, shows a blank space under "race."

Of course, there's no confusion as to Rubio's lineage. His name gives away his Hispanic roots, and he has made it part of his political narrative to tell the story of how his parents left Cuba seeking a better life for their children.

A Rubio spokesman said the Florida senator "doesn't recall" how he renewed his license.

The race-versus-ethnicity question is far from unusual in Rubio's diverse hometown of Miami. Some Hispanics have a personal policy of listing their race rather than their ethnicity, since that's really what is being asked. Others choose without giving it much thought, depending on the form and their mood on any given day. Since the options show a lack of understanding about what makes a person Hispanic, why bother taking it too seriously?

The U.S. Census has separated race and ethnicity, specifically over the question of Hispanic origin, since 1997. Perhaps it's time for all government agencies to do the same.