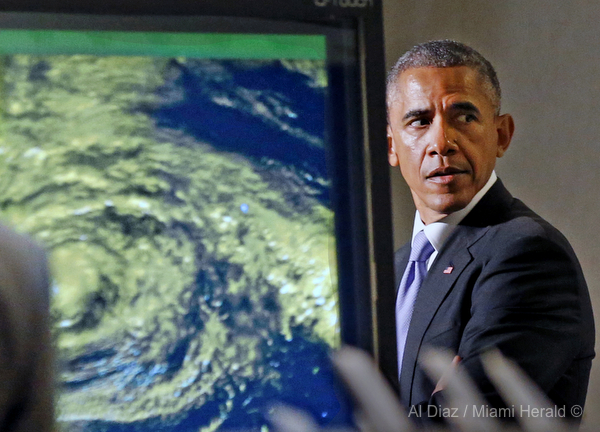 To mark the June 1 start of another storm season, President Barack Obama toured the National Hurricane Center in Miami on Thursday, learning about storm chasing and forecasting, and urging people to stay vigilant.

He visited the windowless hollows of the Hurricane Center, where the walls are covered with maps and computer screens showing storm forecasts and models. Obama asked staff questions, particularly about advances in technology.

He also wanted to know how pilots collect storm measurements. They fly into the weather systems -- not over them -- he was told.

Rick Knabb, the center's director, assuured him the trips were "generally" safe -- though Knabb recounted one incident in which a pilot lost altitude and was forced to make an emergency landing.

Jamie Rhome, leader of the center's storm surge unit, showed off a new storm surge model forecasters began using last November. Scientists also have better computers to crunch data from the radar they drop into storms, so they can make more accurate models once a system forms.

This year marks the 10th anniversary of Hurricane Katrina, and forecasters worry people have become complacent because they haven't experienced a serious storm in going on a decade. There are also governors in hurricane-prone states, including Florida, who have never been through a major hurricane while in office.

Obama didn't address those concerns in a briefing that followed the tour, but he stressed that people must make their own preparations and not solely rely on local and state governments for help.

During the briefing, Obama sat at the head of a table where he was surrounded by military and civilian administrators, including FEMA Administrator Craig Fugate (who toured Miami Beach on Wednesday), Commerce Secretary Penny Pritzker and NOAA Administrator Kathy Sullivan.

He thanked public servants and mentioned that climate change could make storms stronger -- so Congress should do more to address warming temperatures. (Also seated at the table were U.S. Reps. Carlos Curbelo, R-Miami, and Ted Deutch, D-Boca Raton, both advocates for stronger climate change measures.)

Obama wrapped up his visit to the center by taking questions about climate change on his Twitter account, @POTUS. He also addressed oil drilling and, yes, the NBA playoffs.

.@NathenVieira jr smith having a great season but the heart of the Cavs is Lebron. And no one can outshoot Curry - maybe Korver if wide open