Florida government gets credit for being mostly democratic 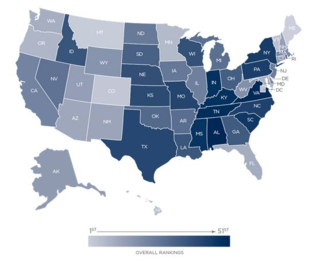 How states rank in the Health of State Democracies report. Florida's No. 11. (Source: Center for American Progress Action Fund)

Florida's democracy is pretty, well...democratic. At least compared to other states.

That's according to a new report out this month from the left-leaning Center for American Progress Action Fund.

The study looked at access to voting, representation in state government and the extent to which outside influencers can shape policy. Overall, Florida ranked 11th nationally, the only Southeastern state to crack the top half.

But the center points to failings that it says the Sunshine State ought to improve. Namely, Florida's elected leaders aren't very representative, they say.

Further, the center argues, Florida -- and all states -- should allow felons to vote after they've been released from prison.

"This is not only a civil rights issue, it also is an issue of electoral integrity," the report says. "With fully 1 out of 13 African Americans currently unable to vote, felony disenfranchisement has the potential to affect electoral results as voices from communities of color are disproportionately silenced."

There is one piece of good news, according to the center. Florida, more than any other state but Connecticut, has rooted out the influence of interest groups. That's not to say there's no influence of outside lobbyists, special interest groups and money in Tallahassee (and few in the state Capitol would successfully convince you of that), but it does mean Florida's in a better place than many of its counterparts.

The other bright spot: At least Florida isn't Alabama.