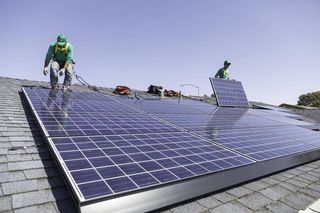 The latest flare-up in Florida's solar wars emerged Wednesday when a group sided with Florida's utility industry and announced it is gathering petitions for a rival constitutional amendment that would give consumers a right to do what they already can do -- put rooftop solar on their homes and be regulated by government.  Download Smart Solar Petition

The effort was blasted by supporters of the Solar Choice amendment as an attempt to undercut their proposal to allow homeowners and businesses to sell solar power up to two megawatts and prohibit government from erecting barriers to a rooftop solar in Florida. That amendment is opposed by Florida's public and private utility monopolies who want to control the sale of all solar power Florida.

"This is an effort to deceive and confuse voters,'' said Mike Antheil, executive director of the Florida Solar Energy Industries Association and a member of Floridians for Solar Choice during a conference call with reporters.  "We are going to do exactly what we’ve been doing which is to continue to speak the truth about solar power and who is blocking solar power in Florida.''

The new group calls itself "Consumers for Smart Solar" and warns that by allowing rooftop solar, customers who don't take advantage of the solar will subsidize those who do. Currently, homeowners may install rooftop solar panels on their homes but cannot sell it back to the grid while electricity companies, such as Florida Power & Light, generate solar power using green fields and and sell it to whomever they wish.

"We believe that their amendment language will lead to a variety of unintended consequences that will hurt Florida's consumers," said Jim Kallinger, the head of the conservative Florida Faith and Freedom Coalition and a co-chairman of Consumers for Smart Solar.

Kallinger said that rooftop solar "will result in subsidies, higher taxes or user fees" and will force some consumers to pay "more than their fair share to maintain the cost of the grid while others get a free ride."

Floridians have the right today to install solar now, but they have to pay for the initial cost and own it themselves. The amendment is designed to encourage homeowners to lease their rooftops for small-scale solar and sell it back to the grid.

State and local governments now can charge people a differential on the cost of subsidizing backup power and electric grid access, which most don't do, but if the Solar Choice amendment were to pass they would be prohibited of imposing new fees on solar users.

Kallinger accused the Solar Choice amendment of being driven by "out-of-state solar utilities who want to operate in a way that is heavily subsidized and dangerously unregulated."

But Tory Perfetti, chairman of Floridians for Solar Choice, countered that the amendment will help customers "take control of their bill."

"Anyone who is standing against this is representing the actual elite class which controls how much people pay in this state," Perfetti said. He and other supporters of the amendment contend that more solar power will result in less need to build expensive power plants and therefore lower the cost of electricity for all utility customers.

Florida-based solar companies and environmental groups tried unsuccessfully for years to get the Florida Legislature and the Public Service Commission to expand solar in Florida before launching the amendment effort. Supporters include include the Florida Retail Federation, the Southern Alliance for Clean Energy, the League of Women Voters, the Christian Coalition and Conservatives for Energy Freedom.

"We know better than anyone that the monopoly utilities will stop at pretty much nothing to slow or eliminate the growth of distributed energy,''  said Antheil of the Solar association.

The ballot language for the was written by John Sowinski, an expert in petition drives who has helped to thwart amendments related to gambling initiatives, the sugar tax and the Hometown Democracy initiative.

Batchelor said that by putting what is already allowed by law into the state constitution it "ensures that it is highly unlikely to change, which provides certainty to those considering a significant investment in solar and, thus, encourages such investment."

Under existing law, Florida has some of the lowest solar investment in the nation with less than one tenth of one percent of all energy usage.

Floridians for Solar Choice has collected nearly 100,000 of the more than 683,000 signatures needed to get on the November 2016 ballot and have earned enough support to get a hearing on the ballot language in September.

In addition to opposition from Florida Power & Light, Duke Energy, Tampa Electric Co., Gulf Power, and the Florida Municipal Electric Association, the Solar Choice amendment is being opposed by Attorney General Pam Bondi and the Florida League of Cities.

The Florida Supreme Court is expected to hear arguments on the ballot-language of the  proposal Sept. 1.