« In Cleveland, Carly Fiorina scores points in battle for GOP relevance | Main | Marco Rubio says he doesn't support abortion-ban exception for rape, incest -- but he signed on to bill that did » 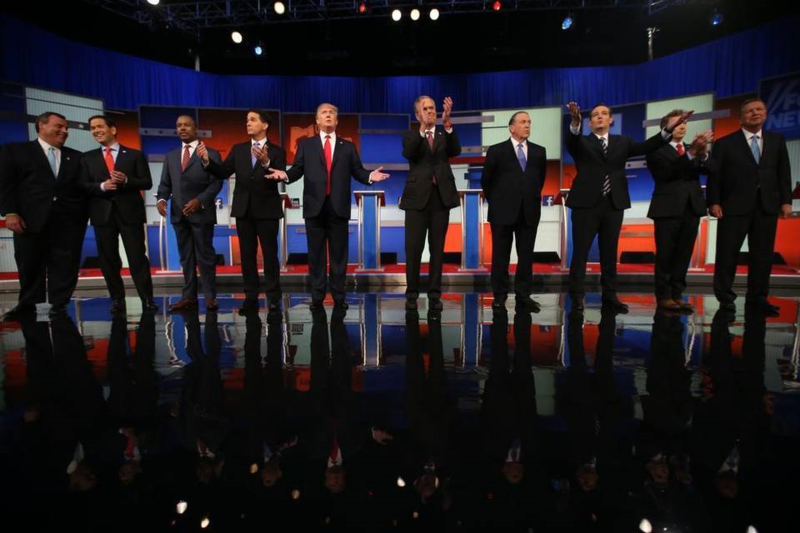 CLEVELAND -- It was the presidential debate on steroids.

Whether it was the truculent presence of Donald Trump, or the fact that there were 10 pumped-up men on stage, the first 2016 Republican debate Thursday night was one of the most combative in years.

And it made for great television.

The fireworks started early: Trump, the frontrunner in the early polls, refused to pledge to support the GOP’s eventual nominee, effectively threatening to blackmail the party if he loses the primary and chooses to run as an independent candidate.

“I cannot say,” Trump said. “I am discussing it with everybody but I’m, you know, talking about a lot of leverage.”

“I want to run as the Republican nominee,” he added.

And that set the tone the rest of the night at the Quicken Loans Arena in Cleveland, which hosted the first of nine planned GOP primary debates.

Florida Sen. Marco Rubio, known as a gifted communicator, delivered a particularly strong performance, repeatedly trying to act as the affable adult in the room. He didn’t take the bait when moderator Chris Wallace asked him about his one-time mentor, Jeb Bush, and Rubio’s lack of executive experience.

He received robust applause throughout the night.

Unlike Rubio, who’s in the middle of the pack in the polls, the pressure was on Bush, the former Florida governor who has raised more campaign cash than anyone else but at times stumbled on the campaign trail with careless answers. He wasn’t as crisp as Rubio, but he defended himself commendably on the issues where he’s weakest among GOP primary voters: immigration reform, Common Core educational standards and the Bush family dynasty.

“Maybe the barrier — the bar’s even higher for me,” Bush conceded. “That’s fine. I’ve got a record in Florida. I’m proud of my dad, and I’m certainly proud of my brother. In Florida, they called me Jeb, because I earned it.”

At the end of the debate, Rubio walked across the stage and kissed Bush’s wife, Columba, on the cheek. Both Miamians had contingents of supporters in the audience, reportedly including, in Rubio's case, longtime friend and former U.S. Rep. David Rivera. Bush planned a rally after the debate at a corner of neighboring Progressive Field, home of the Cleveland Indians.

On stage, it wasn’t all The Trump Show, but the real-estate mogul cut a dominant figure every time he spoke.

Trump went after Megyn Kelly, one of the Fox News moderators, when she asked about times Trump has called women “fat pigs, dogs, slobs and disgusting animals.” (“I don’t frankly have time for total political correctness,” he said. “And honestly, Megyn, if you don’t like it, I’m sorry. I’ve been very nice to you, although I could probably maybe not be, based on the way you have treated me.”)

Trump called Bush "a true gentleman," but only after Bush denied a Politico report that he had privately called Bush an “a------.”

When Trump claimed to have donated money in the past to most of his rivals, Rubio cut in: “Not to me! You gave to Charlie Crist!”

There were other pass-the-popcorn moments that didn't feature Trump, however. In the most heated exchange of the night, Paul went after New Jersey Gov. Chris Christie at length over the government’s bulk record collections, which Christie, a former federal prosecutor, supports.

“Get a warrant!” Paul demanded.

Christie got in a retort: “Listen, senator, you know, when you’re sitting in a subcommittee, just blowing hot air about this, you can say things like that.”

Paul brought back Christie’s accepting federal funds for his state after Hurricane Sandy: “I don’t trust President Obama with our records. I know you gave him a big hug, and if you want to give him a big hug again, go right ahead.”

It was the rare night where Texas Sen. Ted Cruz, a champion college debater at Princeton known for his oratory in Congress, had some of the tamer responses. Ohio Gov. John Kasich, who barely made the cut for the debate, drew cheers from the hometown crowd.

Wisconsin Gov. Scott Walker, considered a top contender, did well but had a hard time distinguishing himself from the pack, as did the others on stage: retired neurosurgeon Ben Carson and former Arkansas Gov. Mike Huckabee.

“It really doesn’t matter which Republicans are up there, because they are all the same,” she said. “They don’t have any new ideas for moving the country forward.”

The Democratic Party revealed details Thursday about its six planned presidential debates, including one co-hosted by Univision and The Washington Post next February or March in Miami.

“Democrats are fighting for the middle class,” Wasserman Schultz said. “Republicans want to go back to trickle-down economic policies that have failed over and over again in the past.”

Cleveland was abuzz with GOP staffers and politicians and their entourages. Some downtown hotels have been booked solid for weeks in advance of the debate. TV satellite trucks snake outside the arena. An Uber driver from Youngstown, Ohio, said he came into town specially to pick up debate-goers (and engage in banter over whether Fox’s controversial process to rank the candidates was “rigged”).

Ohio is one of two key states, along with Florida, that could swing the election. Cleveland will also host the Republican National Convention next summer, when the party will crown its nominee.

The evening debate was the second one of the day. Seven candidates were relegated to an earlier debate, dubbed the “happy-hour debate” by its participants but derided by critics as the “kiddie table.” Its star was former Hewlett-Packard chief executive Carly Fiorina; in the fight for GOP relevancy, no one punched up better.

“Hillary Clinton lies about Benghazi, she lies about emails, she is still defending Planned Parenthood, and is still her party’s frontrunner,” Fiorina said before pivoting – without naming him – to Bush.

“2016 is going to be a fight between conservatism and a Democrat Party that is undermining the very character of this nation,” she said. “We need a nominee who is going to throw every punch, not pull punches, and someone who cannot stumble before he even gets in the ring.”

“Americans are tired of hearing this debate about what are you going to do about illegal immigration. For 30 years this country has beenbaited with that,” he said, adding a rare of a GOP hero. “Ronald Reagan signed a piece of legislation that basically allowed for amnesty for over 4 million people, and the border is still not secure.”

Louisiana Gov. Bobby Jindal also got in jabs at Bush and Rubio.

“You know, we’ve got a lot of great talkers running for president. We’ve already got a great talker in the White House,” Jindal said. “Jeb Bush says we’ve got to be willing to lose the primary in order to win the general. “Let me translate that for you. That’s the establishment telling us to hide our conservative principles to get the left and the media to like us. That never works.”