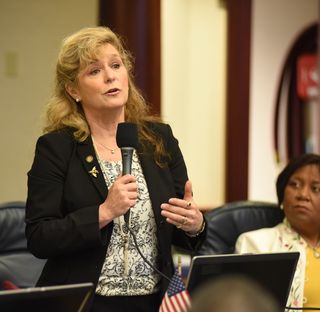 A bill to ditch Florida's 147-year ban on unmarried men and women living together is getting renewed life in the state House this fall, but it's far too soon to know how much traction the proposal might get during session.

In the spring, bills to repeal the cohabitation ban died in both chambers.

Florida is one of only three states that still criminalize cohabitation. It's a second-degree misdemeanor but rarely enforced.

The newest proposal to repeal the law (HB 4003) cleared the House Criminal Justice Subcommittee this morning by a 10-3 vote, drawing some brief, lively discussion.

"The government should not be peeking under the sheets, frankly, of its citizens," said Rep. Michelle Rehwinkel Vasilinda, D-Tallahassee, who is co-sponsoring this year's bill with Weston Democratic Rep. Richard Stark.

Rehwinkel Vasilinda said keeping the 1868 law on the books could create the potential for "discriminatory behavior," but opponents of the bill cite religious and moral reasons for why it should stand.

Rep. Charles Van Zant, R-Keystone Heights, asked Rehwinkel Vasilinda about her own marital status - she's married - to help articulate his disdain for what he called a "bad bill."

"Are you aware, Representative, this flies in the face of defense of your own marriage?" Van Zant asked, adding: "Who are we to say that we do not at least fear God?"

Rehwinkel Vasilinda pointed out that the existing law doesn't ban men living together or women living together, which could raise legal challenges of discrimination, and the law itself is unrealistic to enforce, she said.

"I think it would be distasteful to find out or prove whether someone is living in a romantic relationship and not platonically," she said. "Get this off the books and clean it up ... and our clergy and religion and our public morals can still stand strong."

The bill now goes to the full House Judiciary Committee for consideration, but as of yet, no Senate companion has been filed. Without one, the legislation is dead on arrival.