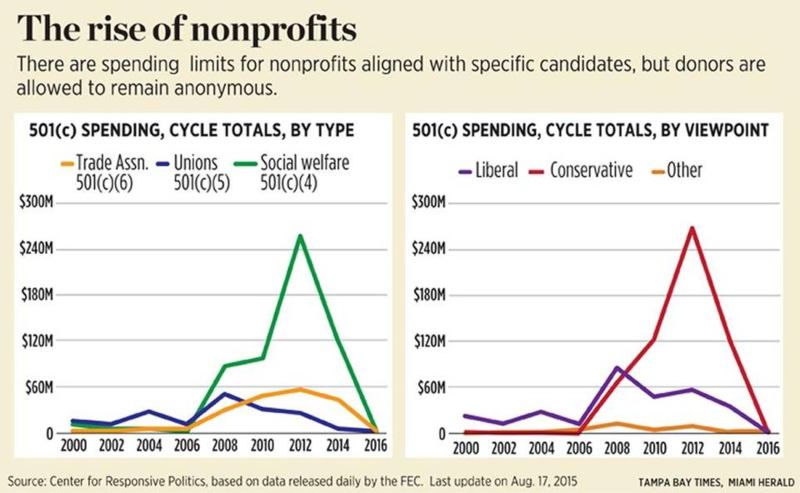 It looks like any political ad, opening with Sen. Marco Rubio warning that “evil is confronted or defeated, or it grows and it spreads.” A narrator marks the day President Barack Obama announced the Iran deal, a nuclear bomb exploding on the screen.

“Congress can stop it,” the ominous voice says. “Marco Rubio is leading the fight. Tell your senators to join Marco Rubio and defeat Obama’s deal with Iran.”

Shown nationally on Fox News as Rubio runs for president, the ad is not from the Florida Republican’s campaign or one of the super PACs that has injected hundreds of millions into politics.

It is the work of a nonprofit group — and you will never know who paid for it.

On the surface, the ad was a failure; Obama secured the votes Wednesday to withstand a congressional challenge to the Iran deal. But the seven-figure buy enhanced Rubio’s profile and underscores a major shift in politics.

Nonprofits long have been used by organizations aligned with political bents, including the Sierra Club and the NRA, to promote “social welfare.” Then came the landmark 2010 U.S. Supreme Court decision Citizens United, which said corporations and unions were effectively the same as individuals and could spend directly on politics.

That decision gave birth to super PACs and put nonprofits on steroids — spending exceeding $300 million in 2012, double the previous election. Then, the groups were mainly run by partisan groups with a broad range of targets.

The 2016 election marks the rise of nonprofits aligned with specific candidates. Rubio is one of eight GOP presidential contenders, including former Florida Gov. Jeb Bush, benefiting from the extra muscle.