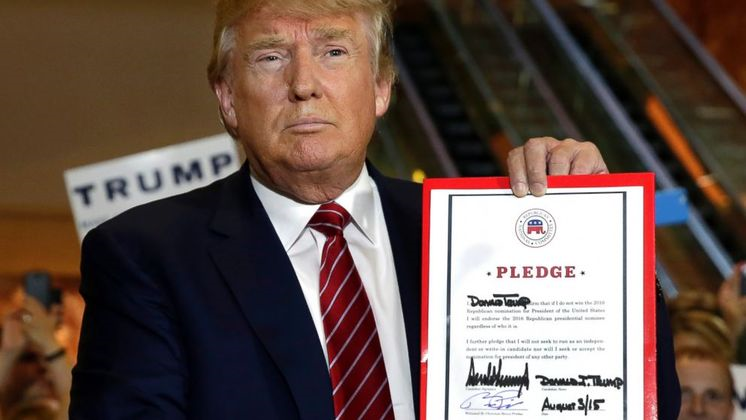 On Wednesday, Donald Trump dug the GOP’s hole with Hispanics deeper, lashing out atJeb Bush for using Spanish. On Thursday Trump got a personal visit from RNC chairman Reince Priebus and another huge wave of media attention.

Priebus was trying to smoke out Trump, who refused to rule out a third-party run during the first debate. Did he think the master salesman would take the bait? If anything the stunt handed a certificate of legitimacy to Trump, who has been accused by Jeb Bush of not being a true conservative.

“I was greatly honored that he did come up,” Trump said of Priebus at his news conference, carried on all the cable news channels – even CSPAN. Trump waved the pledge for all to see.

But what’s to stop Trump from discarding it and running as an independent? Nothing.

How hard Priebus will work on collecting the pledge from others? Not that it’s necessary. Any candidate seeking access to RNC data must make the pledge. Same with entering the South Carolina primary.

In validating Trump, Priebus has put other candidates on the hook for supporting the GOP nominee – even if that’s Donald J. Trump.