GOP Florida House speakers past and present back Jeb Bush 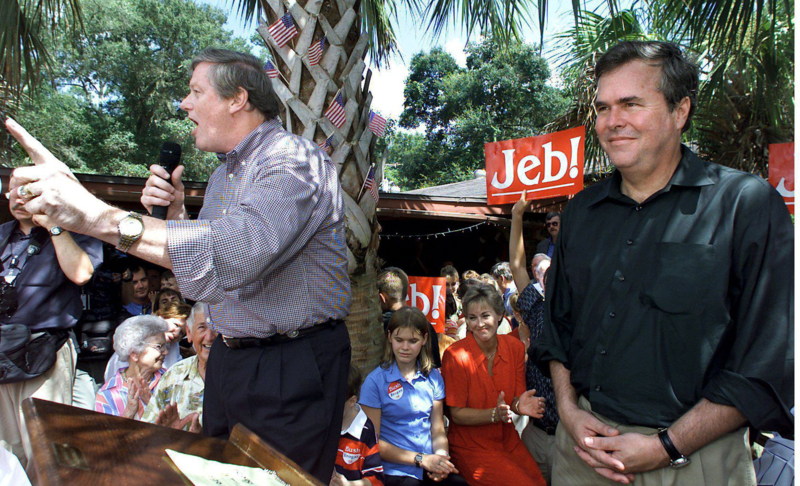 Let there be no doubt that Florida's Republican establishment wants Jeb Bush for president.

Bush, who amassed a wealth of Tallahassee political capital in his eight years as governor, has nabbed formal endorsements from all but two recent GOP speakers of the Florida House of Representatives, several of whom have already been raising money for the candidate.

The list includes current Speaker Steve Crisafulli and his predecessor, Will Weatherford, as well as Dean Cannon, Larry Cretul, Allan Bense, Tom Feeney, John Thrasher and Daniel Webster. Webster, now a U.S. congressman, was the first speaker to take the House reins after it came under GOP control in 1996.

"Jeb Bush's conservative record as Governor is second to none," Cannon said in a statement provided by Bush's campaign. "He is exactly who our country needs as President."

The only speakers missing from the list? Bush's home state presidential rival, U.S. Sen. Marco Rubio, and Johnnie Byrd, who recently described Bush's leadership style as "my way or the highway." Bush didn't seek the support of former Speaker Ray Sansom, was accused of pursuing $6 million in state money for a hangar to benefit a GOP donor. A judge later dropped the charges. Sansom never presided over a regular legislative session.

The Bush campaign publicized the endorsements on the same day it's opening a state headquarters in Tampa, and two days before cutting the ribbon on its Miami field office -- all signs that Bush is preparing for a long primary that may require him to spend money to win Florida on March 15, 2016.

Last week, the campaign trumpeted the support of about 300 Republicans in Miami-Dade, the state's largest county and where Bush lives; in June, Bush was endorsed by three Florida Cabinet members and 11 of 17 U.S. House Republicans.

Bush has followed the traditional primary strategy of rolling out state-by-state endorsements to show widespread support from the kinds of people with money or networks to help win caucuses and elections. The announcements, though, have done little to bolster Bush in public-opinion polls.

Rubio, for his part, has been less focused on the endorsement game. He has traversed the country seeking political contributions -- a harder task for someone without the Bush name -- and reminding voters that he wasn't the GOP's favorite either when he won his 2010 Senate race. His campaign headquarters remains in Washington D.C.

Here are the Bush speaker endorsements, as provided by the campaign:

Steve Crisafulli (2014 – present)
Speaker Webster
"I've known Jeb Bush for three decades, served alongside him in Florida, and witnessed his tenacious, hands-on approach to government reform. Jeb has strong executive experience and it is an honor to endorse him as a principled leader with a proven conservative record."
Speaker Thrasher
“Governor Jeb Bush will lead our nation as he led our state - a staunch conservative with a clear vision to lift families up and open the doors for abundant economic growth and educational opportunities."
Speaker Feeney
“Jeb has forward-looking solutions to our nation’s problems will be focused on returning power to the States and allowing for greater local control. America needs Jeb’s proven, conservative leadership.”
Speaker Bense
"It's an honor to endorse a leader who has a proven conservative record. As Speaker of the Florida House while Jeb was Governor, I witnessed first hand what true leadership really is. Jeb will bring this nation together and return us to being the 'shining city upon a hill’.”
Speaker Cretul
"Jeb is a strong leader with a proven record of advancing conservative principles. He has always been and remains dedicated to ensuring individuals from all different walks of life are given the opportunity to rise up and succeed.”
Speaker Cannon
“Jeb Bush’s conservative record as Governor is second to none.  He is exactly who our country needs as President.”
Speaker Weatherford
“Jeb is a proven leader who stands by his conservative principles. Jeb’s executive leadership experience  as Governor of Florida and as an entrepreneur in the private sector make him exceptionally qualified to  restore our leadership role in the world and turn our economy around.”
Speaker Crisafulli
"Jeb was a true leader as Governor of Florida, he shrank government, grew the economy and cut taxes. Now, more than ever, we need a true leader with a strategic vision for how to make America a world leader again. I will work hark to ensure Jeb Bush is the next President of the United States.”
Photo credit: Allison Long, Miami Herald file
Caption: John Thrasher introduces Jeb Bush at a 2002 reelection rally in East Palatka, Florida.