Donald Trump surprised reporters -- and got big applause -- Wednesday at a New Hampshire town hall where he cursed at least twice, including to dismiss the friendship between Republican presidential rivals Marco Rubio and Jeb Bush.

Here are the tweets from reporters who were there or watching live:

"It's political bullshit," Trump says of Rubio and Bush saying they're "friends" even though "they hate each other."

And here's the video (cursing towards the end):

Trump's other swear word came up on the topic of Iraq:

Trump on Iraq: "As soon as we leave, they knock the shit out of everybody."

Obama to state lawmakers: Ball is in your court

State lawmakers – including two from Tampa – joined President Barack Obama to talk about and push for parts of the Democratic agenda that face long odds in Congress but could get some traction in statehouses.

State Sen. Arthenia Joyner, a Democrat from Tampa who represents parts of Hillsborough, Manatee and Pinellas counties, was among the group of about 50 Democratic state lawmakers who met with the president. She joined a group of about a dozen of the participants outside the White House to talk about the event, which doubled as a pep talk and strategy session to push for issues on the president’s economic agenda.

Also from Florida at the event was state Rep. Janet Cruz of Tampa.

The thrust of the event was to recognize the “need to enhance the middle class – and to make sure that there’s a decent quality of life for all of our people,” said Joyner, who is the state Senate minority leader.

She noted efforts in Florida such as ones to boost the minimum wage.

The key issues being pushed by the lawmakers – and the president: Raising the minimum wage; ensuring paid sick leave for workers, as well as paid family medical leave; enhancing college affordability; and reforming the criminal justice system.

“We are not going to sit on the sidelines and let inaction be our answer,” said Assemblyman Michael Blake of New York. “That’s the reason why we are here today.”

In his pep talk to the lawmakers, Obama acknowledged that things will be tough in Washington – making their jobs that much more important.

“Given that, at least for the next year, year and a half, there’s not going to be the kind of action on a wide range of issues that we’d like to see coming out of Capitol Hill, that puts more of a burden -- but also a greater opportunity -- on state legislatures all across the country,” the president said. “Because you can act when Washington won’t.”

He noted that the Republican-led Congress hasn’t raised America’s minimum wage, “but 17 states did it on their own – and that boosted wages for 7 million workers.”

“So you are to be congratulated for that,” he said. “That’s your work. … So over the last few years, states likes yours have gotten a lot done. And I hope you’re going to head back home ready to get even more done.”

The U.S. House on Wednesday afternoon voted 277-151 to pass a measure to keep the government funded through December.

Here's how Florida Republicans stood on the issue:

"Though this does not fix the underlying problem of agreeing on a long-term funding solution, it does avoid an unnecessary and harmful government shutdown similar to that of 2013," said Rep. Carlos Curbelo of Miami.

The House took a symbolic vote on defunding Planned Parenthood and all Florida Republicans went along with that. The Senate previously passed the stop-gap. Sen. Marco Rubio did not vote due to campaigning.

All Florida Democrats voted for the legislation, which extends funding to Dec. 11.

Jeb Bush got in a couple of subtle digs at rival Marco Rubio in an interview Wednesday with CNN: He called him a follower in Tallahassee and suggested electing another first-term senator as president to follow Barack Obama would be foolish.

Obama, Bush said, has "been the greatest, most divisive president in modern history," according to CNN. "What we need is someone with proven leadership to fix things, and I believe I have those skills."

Bush has slid in early polls, while Rubio has seen a rise, particularly since Rubio's strong performance at the last Republican presidential debate.

The difference between the two men, Bush insisted, is his track record as Florida governor.

"I disrupted the old order in Tallahassee," Bush said. "I relied on people like Marco Rubio and many others to follow my leadership, and we moved the needle."

Rep. David Jolly voted in favor of a continuing resolution that keeps the federal government open on a temporary basis. But Rep. Ron DeSantis joined 150 other Republicans in voting against the resolution.

“My concern within the caucus is those members who truly think that shutting down government is a legitimate tool,” Jolly said. “We empower President Obama every time we shut down government.”

The shutdown push was driven by opponents of Planned Parenthood who stood firm against funding the organization.

“Continuing resolutions are no way to legislate,” DeSantis said in a written statement. “Today's continuing resolution extends the spending priorities of the Harry Reid Senate from 2014, fails to direct money away from organizations like Planned Parenthood.”

Two other candidates for Sen. Marco Rubio’s seat are current members of Congress: Democratic Reps. Patrick Murphy and Alan Grayson. They joined the rest of the Democrats in voting against the shutdown.

In August, Jones asked the 12 top officials in charge of prisons and probation to reapply for their jobs as part of a major realignment designed to centralize power at the agency. As part of the exercise, she accepted 71 applications for the three existing regional director of institutions jobs and the open post at a newly added fourth region. She has now narrowed the list to 17.  Download Applicants Names for Regional Director of Institution Advertisement (1)

Among them are current regional chiefs Sam Culpepper, Eric Lane and Randy Tifft, as well as assistant regional directors Rodney Tomlinson and Larry Mayo. All of those officials have been at the helm during one of the most brutal periods in Department of Corrections history as the number of inmates who died of unnatural causes reached record numbers, use of force was at a five-year high, and the agency was forced to fire and discipline officers involved with inmate abuse.

Only four applicants are from outside Florida: James Dzurenda, deputy commissioner for the New York City Department of Correction and Salvador "Tony" Godinez, former head of the Illinois prison system who retired in March after a new governor was elected, Milon Woolf, warden at the the Idaho Department of Corrections and Gary Albrecht, a contract officer with the U.S. military command in Afghanistan, overseeing corrections education and training.

Godinez was head of that Illinios’ sixth largest agency with 78,000 inmates and 11,000 employees. He came under fire last year after a Chicago Sun-Times investigation found that the agency permitted a former gang member with a lengthy criminal record to be hired as an advisor to the chief of parole. During Godinez’s four-year tenure, the agency struggled with overcrowding issues as then Gov. Pat Quinn sought to close prisons and halfway houses.

The state government’s role as a property insurer is only going to get smaller over the next four months.

Citizens Property Insurance has already passed off 1 million insurance policies to private carriers since 2012, and another surge is coming over the next four month, said Barry Gilway, CEO and president of Citizens.

Gilway told the Citizens board of governors on Wednesday that there will be enormous action in October and November and he foresees a very strong January coming for take-outs - policies offered up to private carriers.

By the end of the year, Gilway predicted tens of thousands of more policies will be in the hands of the private market. 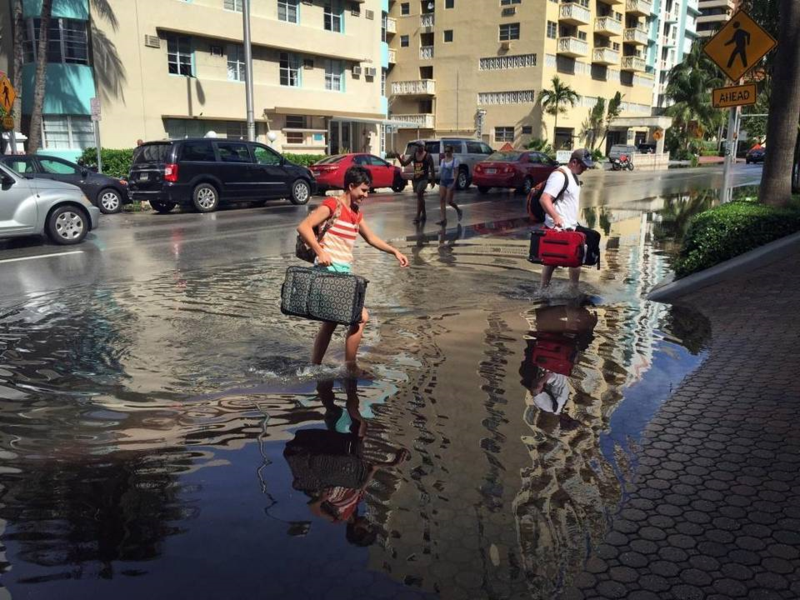 The Democratic senator got to experience firsthand how the seasonal king tides flood the city. He showed off enlarged photographs showing water up to pedestrians' ankles.

Almost six months after Jeff Atwater unequivocally declared he would not be a candidate for the U.S. Senate, the state’s elected chief financial officer is once again considering jumping into the contest saying there is still a possibility he will run in 2016.

Atwater said friends and people he has deep respect for have been constantly asking him if he might be a candidate, despite his April declaration he would not run.

“Yea, I would say there is still a possibility of that,” Atwater, a Republican from Palm Beach County, said in an interview with the Herald/Times Tallahassee Bureau.

The GOP field for the U.S. Senate is crowded, but mostly with candidates who have never run for statewide office before. The field already includes U.S. Reps David Jolly, R-Indian Shores, and Ron Desantis, R-Ponte Vedra Beach, as well as Florida Lt. Gov. Carlos Lopez-Cantera and Orlando businessman Todd Wilcox. U.S. Reps. Patrick Murphy and Alan Grayson are the leading candidates running for the Democratic nomination.

Early polls have shown voters unfamiliar with any of the GOP candidates running. While Atwater is far from a household name, he has run two statewide campaigns in 2010 and last year’s 2014 re-election.

Atwater was thought to be a front runner if he got in the race because of his elective experience. Prior to being chief financial officer he was a member of the Florida Legislature, where he rose to become Senate President in 2008. But Atwater stunned GOP insiders in April when he told the Times/Herald he would not run for the U.S. Senate.

"While I have certainly taken these words of support under consideration, I will not be a candidate for U.S. Senate in 2016," Atwater later posted on Facebook.

But it was a different answer this week asked about running for the seat.

“We won’t rule that out,” Atwater said.

The U.S. Senate seat open in 2016 is currently held by Marco Rubio, who is not seeking re-election so he can run for president.

The results for Republican Donald Trump are striking.

Here are the top five words or groups of words they offered in the open-ended question:

The error margin was 5 percentage points.