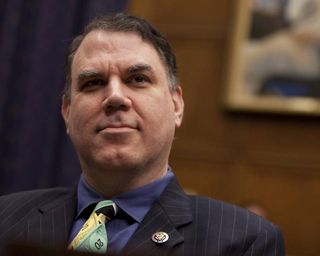 The retired Chicago teacher, who unexpectedly found herself named nearly 2,300 times in Alan Grayson's most recent Senate campaign disclosure, says the situation has been "one of the more bizarre occurrences in my life."

Jacqueline Kirley didn't know about the anomaly reported in the Democratic congressman's quarterly report -- filed two weeks ago with the FEC -- until the Herald/Times called her Wednesday. The question of 'What happened?' seemed answered Thursday when Grayon's campaign acknowledged a "very weird, weird" glitch in their reporting software.

It caused Kirley's name to be associated with the donor ID of a political action committee that helps Democratic candidates raise money; the mistake incorrectly identified contributions made through the PAC as having come from Kirley when she, in fact, had not donated anything to Grayson's Senate run.

Kirley couldn't be reached for a final comment prior to our story running yesterday, but she replied late Thursday evening by email -- relaying a sense of relief, but also some lingering questions of how the report had been filed with such an obvious flaw.

She confirmed Grayson called her personally earlier Thursday, after the Herald/Times sought an explanation from the campaign. Kirley said Grayson apologized for the mishap and explained how it would be fixed. She said the reason he followed up the call with an email, too, was because she insisted on receiving something in writing from the campaign.

Here's the email @AlanGrayson sent Jacqueline Kirley apologizing that she showed up 2,300 times in his FEC report: pic.twitter.com/JE3nLyer3c

"He proposed sending it when 'they'd got to the bottom of this and could give me an explanation.' I responded that I could understand their wanting to do that later but that I wanted something now--email or postal mail--that essentially said what he'd said to me orally," she wrote.

Kirley added, "I am comfortable now knowing that I have a written statement from him acknowledging that my name was mistakenly added to his campaign finance report, that it will be removed, and that it was on no previous report. ... This has to be one of the more bizarre occurrences in my life!"