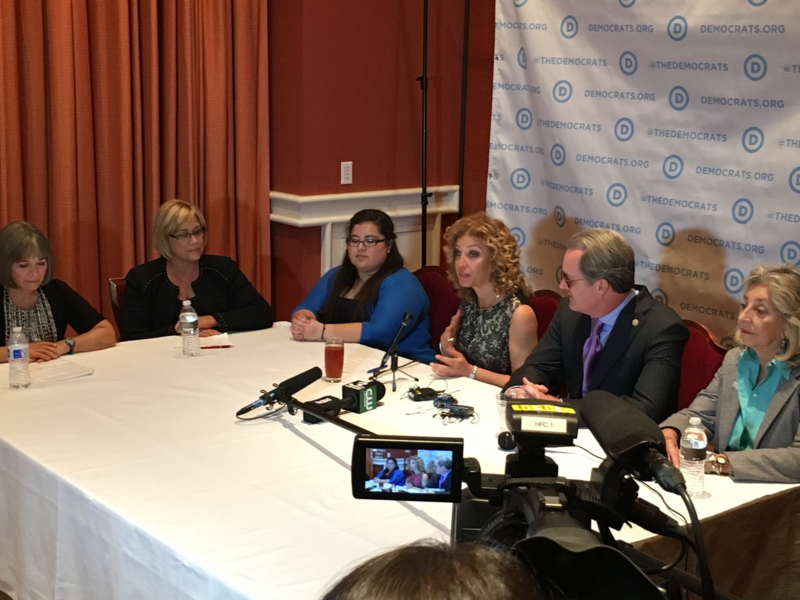 LAS VEGAS -- U.S. Rep. Debbie Wasserman Schultz of Weston traveled to Nevada as the Democratic National Committee chairwoman to bask in the glow of her party's first presidential debate. But she got caught up in an intra-party tiff over Democrats' debate rules.

A DNC vice-chairwoman, U.S. Rep. Tulsi Gabbard of Hawaii, said Monday the party rescinded her debate invitation after she spoke out about rules limiting the number of debates and punishing candidates if they agree to participate in unsanctioned events. Hillary Clinton's challengers have complained limiting the number of debates to six benefits the well-known former secretary of state.

"That's simply not the case," Wasserman Schultz said on MSNBC.

"The congresswoman was asked to focus on our candidates on the issues that are important to Americans to draw a contrast with the Republicans -- " Wasserman Schultz continued.

Mitchell: "But she says there should be more than six debates."

"We are a big-tent party and welcome those opinions," Wasserman Schultz insisted. "But this debate and every debate going forward is about the issues. She is continuing to focus on process, which she's entitled to do, but we asked her if she could focus on those issues and she chose not to come because I guess she can't."

A clearly irritated Wasserman Schultz then told CNN's Wolf Blitzer that the issue was "silly."

"This is so ridiculous," she said. "This is my point: We need to focus on our candidates. It's not about her or me or anyone else."

Later, when Wasserman Schultz appeared before reporters at a "roundtable" discussion with a firefighter, a nurse and an undocumented immigrant, she refused to answer more questions on the matter.

Harry Reid of Nevada, the Senate minority leader, told reporters, "I am satisfied with six debates." ("I didn't think the congresswoman from Hawaii is running for president," he added dryly.)

Gabbard, meanwhile, was offered a debate ticket by U.S. Sen. Bernie Sanders of Vermont, one of the candidates who will be on the stage. She told CNN she turned it down.