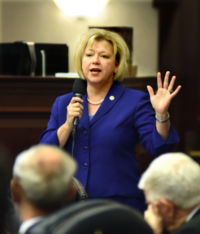 Add this to the list of fundraisers that Florida lawmakers will be hosting and attending when they return to Tallahassee for committee work next week:

The event is being held at the Governor's Club on Tuesday evening, and Crisafulli is listed as the host on the invitation.  Download TallyInviteOct6

Also planned to have campaign fundraisers in their honor this week are Republican Reps. Greg Steube of Sarasota, Heather Fitzenhagen of Fort Myers, Holly Raschein of Key Largo and Brad Drake of Eucheeanna.