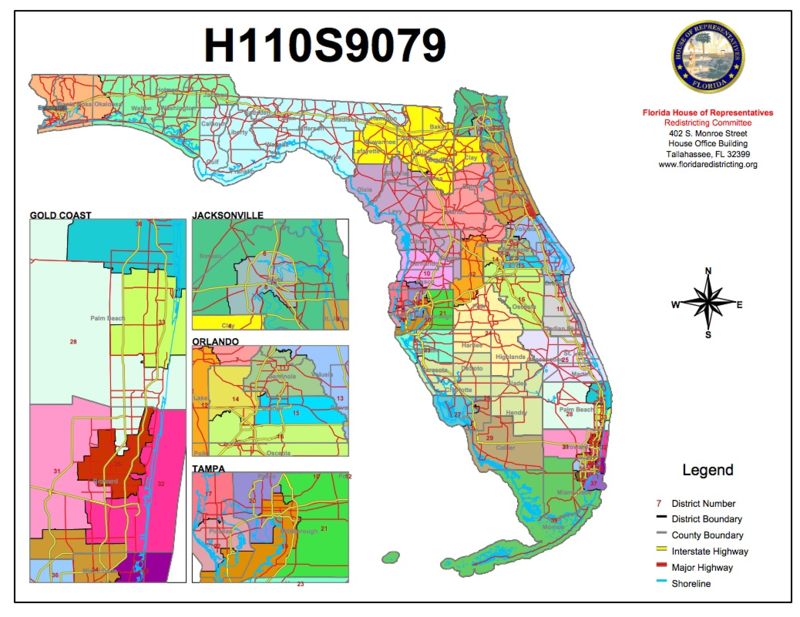 House Redistricting Chairman Jose Oliva quietly rejected a plan to revamp Miami's three Hispanic districts as proposed by the Florida Senate on a 22-18 vote on Wednesday.

A draft map, S9079, that Oliva said merged the best of the Senate plan, with some of the modifications offered by the redistricting challengers, was filed Friday in preparation for the House Redistricting Committee meeting on Monday.

The proposal restores the configuration of the Miami districts to an arrangement close to one originally drawn by House and Senate staff in what was labeled base map S9078, and it roundly rejects the changes offered by Sen. Miguel Diaz de la Portilla, R-Coral Gables, in an effort to keep Little Havana whole.

Oliva told the Herald/Times that Diaz de la Portilla's change, however, "makes me uneasy" as he wanted to avoid court criticism for violating the Fair District's law's ban on drawing districts to favor or disfavor incumbents. In addition to strengthening the Republican performance of the Miami districts, Diaz de la Portilla's changes also removed the possibility that he would be paired with Sens. Anitere Flores, D-Miami, and Dwight Bullard, D-Cutler Bay and it allowed for Littla Havana, the home of his brother, Alex, to remain whole in his district.

In the new Oliva map, Diaz de la Portilla is now drawn into District 37, which includes Little Havana and is 56 only percent Hispanic, a voting concentration Diaz de la Portilla believes is too low to perform well to elect a Hispanic. The House plan also draws Sen. Gwen Margolis, D-Coconut Grove into the district and it performs increasingly Democratic, as 53 percent would have elected President Obama in 2012.

The neighboring Miami districts also match up incumbents. In Oliva's District 39, Flores is paired with Bullard in a seat that is 75 percent black, although she could move into the open District 40, which is majority Hispanic. The third Hispanic district, Hialeah-based District 36, is now held by Republican Sen. Rene Garcia.

The map also continues to split Sarasota County, and it splits and Alachua County, diluting Democrat strength there.

"After a thorough review and with careful consideration, I directed the House Redistricting Staff to prepare an amendment that incorporated concepts found in the Plaintiffs’ map that I believe improved the base map,'' Oliva wrote in a memo to members. "I look forward to presenting you with greater detail on Monday. In the meantime, you can view the map and accompanying reports on the House Redistricting website."