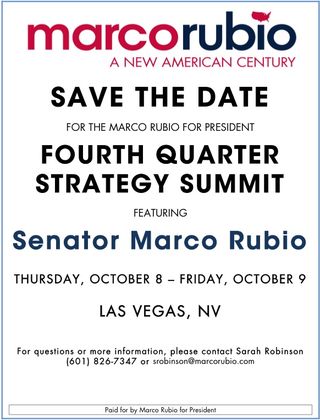 Marco Rubio has channeled his football love -- frequently displayed on the campaign trail -- into a planned two-day event for political donors.

The "Quarter Four Strategy Summit," complete with a flag football game, will take place Thursday and Friday in Las Vegas, according to an invitation obtained by the Miami Herald and first reported by the Washington Post. The fourth fundraising quarter of the year began Oct. 1.

Rubio, a Florida senator and 2016 Republican presidential candidate, played football in  high school and college and, needless to say, remains a fan.

The agenda for the reunion, at the posh Bellagio Hotel, includes transportation to an off-site Rubio campaign rally, a picnic dinner, a "breakfast and team talk," a strategy session titled "Quarterbacking Victory" and a wrap-up lunch titled "Talking the Playbook."

While he's in Las Vegas, a city where Rubio lived several years growing up in what happens to be the fourth early state to hold a caucus or primary, Rubio will hold four public events over three days.