Miami Commission seats are non-partisan. But that might not be clear to voters in the city's left-leaning District 2, where two front-runners campaigning for city commission are getting hammered for being too cozy with Republicans.

In a bizarre twist, the attacks are coming from sources with Republican ties.

Some of their opponents have questioned why partisan politics has entered a municipal race. But the voter makeup of Miami's District 2 is 40 percent Democrat and 23 percent Republican, so the campaigns have an obvious reason to appeal to liberal values.

In the attacks against Solares, two political committees out of Tampa sent mailers to Miami voters. The political ads don't name names, but are likely referring to her connections to Grove businessman Stephen Kneapler, who is suing the city over the Grove Key marina redevelopment project, and Remedios Diaz-Oliver, a prominent Republican booster who was accused of tax evasion in the late 90s and pleaded guilty to two misdemeanors. Kneapler also pleaded guilty to one count of conspiracy after the U.S. Securities Exchange Commission went after him in 1977, nearly 40 years ago.

Solares, as the Miami Herald has previously reported, was registered as a Republican until December. 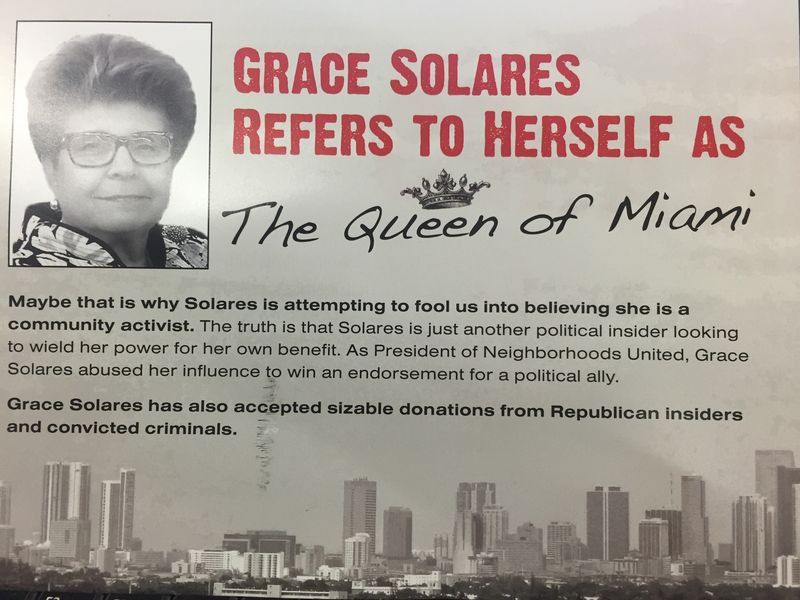 The fliers, which the Solares campaign says are filled with half-truths and misleading statements, are notable for their partisan tone, and also for their ties to Anthony Pedicini, who is, oddly, a Republican operative. He is registered as the agent for the Committee for Progressive Values, and according to local sources has ties to Working Together for Families, the committees that sent the mailers.

Neither committee had much money to spend as of the first of the month, according to the most recently available financial reports, meaning the money funding the attacks was almost certainly contributed in October and has yet to be reported. Miami Beach Commission candidate Jonathan Parker contributed $10,000 in August to Working Together for Families, but said the money was intended for his own campaign, not the city of Miami.

One might wonder what Pedicini's Republican clients think about his organization bombing a candidate for being a -- gasp -- former Republican with Republican support. Pedicini, who at times has parachuted into local elections around the state, lobbing attacks with no clear author, didn't respond to requests for comment left at his office. Reached on his cell phone Thursday evening, he said he was heading into a meeting and too busy to speak.

Solares' political consultant, Christian Ulvert, believes the attacks were orchestrated by Teresa Sarnoff and her husband, term-limited Commissioner Marc Sarnoff, who have criticized the Solares campaign for spending tens of thousands on negative mailers. In a press release, Solares' campaign said "The Sarnoff machine is hiding behind a Republican-controlled PAC to attack Grace Solares and her record of community advocacy."

Teresa Sarnoff did not respond to a phone call and text message requesting comment. Her husband said he is not the candidate in the race, and had nothing to do with the mailers, though his own soft money account, Truth is the Daughter of Time, has produced fliers criticizing the Solares campaign for "petty attacks."

One such "attack" from Ulvert's own political committee, Taxpayers Engaged, went after the Sarnoffs for their support of Gov. Rick Scott. The mailer, which asks "How can Miami Democrats support the Sarnoffs?" says the commissioner endorsed Scott right after the governor signed "sweeping anti-abortion bills." Another produced by the committee, which has received thousands from Kneapler, quotes the commissioner saying that no governor in the U.S. has done a better job than Scott. Ulvert is a Democrat consultant with primarily Democrat clients. But the attacks seemed a bit hypocritical given Solares' own lengthy ties to the Republican party. Asked during a candidates forum last week by filmmaker Billy Corben about her change in registration, Solares said she disassociated herself from the Republican party because she'd always voted as an independent.

"The last time I voted Republican ticket was in Reagan," she said. "Since I've never really voted down the party line, I'm more of an independent. Always have."

So, does it matter that Solares was once a Republican? Or that Sarnoff, a Democrat, co-chaired a Republican fundraiser? The district's 17,000 Democrats will decide Nov. 3.