Giuliani, a former GOP presidential candidate, visited Gimenez at his County Hall office and then addressed a meeting of Miami-Dade department heads. Then the fellow Republicans left the downtown building for an Gimenez fund-raiser at local business executive Manny Kadre's house.

"Tonight I am going to host a fund-raiser for the mayor, who I am a very, very big admirer of and a good friend of for many years," Giuliani said in the County Hall lobby. "But also he asked me if I would come over and talk to his staff about governmental matters and some of my experiences as mayor of New York."

"They wanted to talk a bit about Sept. 11, and what happened that day and some of the reactions I had to it. Because it was such a big part of our history," Giuliani said of the 29th floor meeting with Gimenez's staff. "But then we started talking about some of the other things about government, how to keep crime low and how to keep a city safe. It was a nice experience for me to see how many good people that he has."

Giuliani and Gimenez first in 2000, when Gimenez was city manager of Miami and traveled to New York to see the city's celebrated method of using crime statistics to deploy police, an Gimenez spokesman said. In 2008, Gimenez, then a county commissioner, co-chaired Giuliani's Miami-Dade campaign when the New Yorker ran for president.

Gimenez filed for reelection last week, and so far faces school-board member Raquel Regalado (who is also the daughter of Miami's mayor, Tomás Regalado). Gimenez has been raising money for almost all of 2015, and already has collected more than $1 million for his political committee, Miami-Dade Residents First. 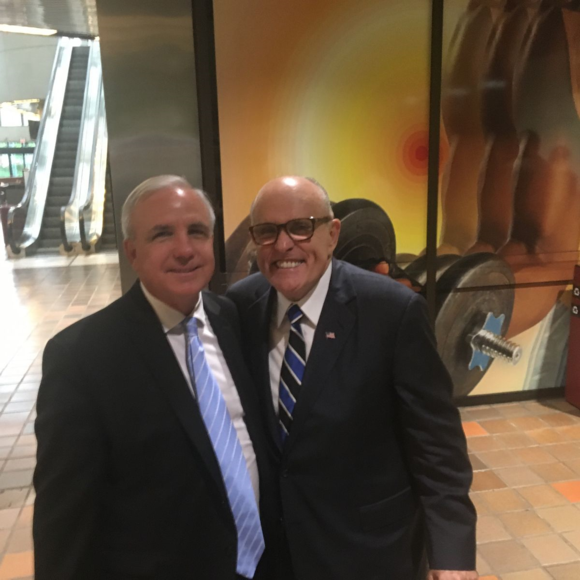 This post was updated to correct when Gimenez said he first met Giuliani.