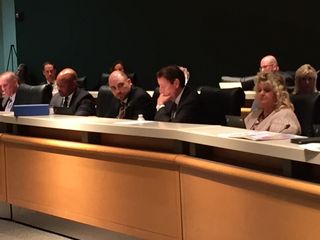 A bitterly divided Florida Senate committee gave preliminary approval to a redistricting redo pushed by Republican leaders Friday that would split 13 communities in Miami Dade and Broward counties and force all 40 senate districts onto the ballot next year.

The Senate Reapportionment Committee voted 4-3 along party lines to bring a Republican-leaning map offered by Sen. Bill Galvano, R-Bradenton, to the floor next Tuesday but its prospects for passage remained cloudy.

All three Democrats on the committee said they objected to the Galvano map, and two of the committee’s four Republicans warned that they may not support it next week because they fear it could run afoul of the state Constitution’s anti-gerrymandering provisions.

"It is defiant. It is unnecessary. It is recalcitrant and I hope that our colleagues at the other end of the hall will recognize the fatal flaw that was placed on the record by our lawyers,’’ said Sen. Tom Lee, R-Brandon. He said the Senate’s lawyers ordered staff to ignore the allegations in the lawsuit that forced lawmakers into special session to fix the Senate map when they drew the map, a decision that could lead the court to reject the plan and become "another black eye" for legislators.

The meeting came at the end of the first week of the three-week special session called to redraw the Senate map. Lawmakers called the session after reaching a settlement in July with the League of Women Voters, Common Cause of Florida and a group of Democrat-leaning plaintiffs who accused them of violating the Fair Districts amendments to the state Constitution.

And, like the current map that elected 26 Republicans and 14 Democrats, the majority of the districts in the new map favor Republicans --although the map does create three stronger Democrat-leaning districts.

In the 2012 presidential election, for example, Mitt Romney would have won 23 of the districts and Barack Obama 17, according to an analysis by MCI Maps, a Democratic consulting firm.

The challengers claimed the Senate violated the Fair Districts amendments to the Constitution in 2012 by drawing a map that intentionally avoided pitting incumbents against each other, crossed Tampa Bay to strengthen a Republican district in Pinellas, split the African American community in Daytona Beach to benefit adjoining Republican districts, and unnecessarily packed black Democrats into districts across the state to help reserve safe seats for Republicans.

Lee, and Sen. David Simmons, R-Altamonte Springs, complained all week that Senate Republican leaders had not addressed those complaints when drawing the new maps.

“Simply drawing maps in a sterile process and not come out with maps that don’t address the base allegations…to me not only lacks common sense but seems defiant,’’ said Lee, a former Senate president. “It seems unnecessarily dug into this notion that we have some superiority complex.”

But Galvano, the chairman of the Senate Reapportionment Committee, told the committee he was “confident” the map, S9090, would withstand constitutional challenge.

“We are all a test case,’’ Galvano said. “Future legislatures will all be able to learn from us but we are all leaving skin in the game in order for them to have a lesson book to work from.”

Galvano and Rep. Jose Oliva, the House Redistricting Chairman, ordered the staff to draw six “base maps” in consultation with House and Senate lawyers but without any input from legislators or political operatives.

House leaders have said they want the Senate to pass one of the base maps, preferably without any amendments from legislators, because they believe that is the strongest way to show the court it was drawn without any intent to protect incumbents or political parties.

But both Republicans and Democrats in the Senate have scoffed at that idea and warned they may not support the Senate’s map without some changes.

"Don't fly us up here to have us just pick a map that's thrown in front of us,'' said Sen. Oscar Braynon, D-Miami Gardens, who has drawn an alternative map he plans to offer to the full Senate. “We as legislators should be involved in this process.”

The only change to the map adopted by the committee on Friday was approving a numbering system that randomly assigned which senators would get four-year terms and which would get two-year terms when they run for re-election 2016. As a result, at least 32 members of the Senate, whose terms do not expire, will face re-election next year.

But Galvano, who also serves as Senate Republican Leader, faces deep dissension within his own ranks to win enough votes to pass a map. Dividing the caucus is a bitter rivalry between Sen. Joe Negron, R-Stuart, and Sen. Jack Latvala, R-Clearwater, over who will be the Senate’s president in 2016.

Latvala, who is not a member of the committee, appeared at the committee Friday and echoed the concerns of Lee, a Latvala supporter. He warned that the proposed map is loaded with red flags that will prompt the court to invalidate it. He described how the map divides Alachua County, to protect Republican incumbents. He did not mention that the incumbents, Sens. Rob Bradley of Fleming Island, and Travis Hutson of Palm Harbor are Negron supporters.

“This is history repeating itself,’’ Latvala warned. He said that the map also unnecessarily divides Miami Dade, Pasco, Volusia and Sarasota counties in ways that are not justified. Of all the base maps produced, he said, this was the only one that has “miraculously no incumbents running against each other.”

Abruzzo told the Herald/Times Friday that while the new district is similar to the current configuration and includes much of western Palm Beach County, he “was in the process of moving back to Wellington” from his home in Boynton Beach and will move into that open seat if the new map is not changed.

Under map 9090 passed by the committee, Latvala supporter Nora Patterson, a former Sarasota County commissioner, would be cut out of an open district now held by Sen. Nancy Detert in Sarasota and the advantage would go to Negron supporter and former state Rep. Doug Holder.

Bradley said he supported the map because it avoids taking districts across the St. John's River, "a major geographic boundary and in many ways defines the area of the state that I represent." He said that in none of the nine maps drafted by the challengers did districts "cross the St. John's River" and he criticized the claim that he may "have some sort of mal intent" because he the district he is in divides Alachua County.

"All I got when I leave here is my reputation,'' he said, noting that Lee "endured this same stuff" when he attempted to improve a Hillsborough-based district in the congressional map that included "implications and whispers."

"I'm just not going to do it,'' Bradley said. "I don't think the St. John's River should be crossed."

Galvano, a Negron supporter, acknowledged the "contested leadership race plays into" the tensions but he said that incumbency was not a consideration when drawing the maps. He also defended splitting Sarasota, Alachua and Pasco counties.

The committee heard about two proposed maps drawn by Braynon and Sen. Jeff Clemens of Lake Worth that draw districts that keep more communities in Miami Dade and Broward together do not cross Tampa Bay.

Braynon said his map made South Florida districts more compact and did not split as many communities and he urged the committee to make improvements, rather than rely on the staff-drawn plan.

Because the Senate agreed to settle the case, the burden of proof shifts from the plaintiffs to the Legislature, which must justify why the map it drew upholds the Constitution.

“We are not the final arbiter. The presumption is against us. The burden of proof is on us,’’ Simmons said. A Latvala supporter, Simmons also said he would like to offer changes to the Galvano map next week.