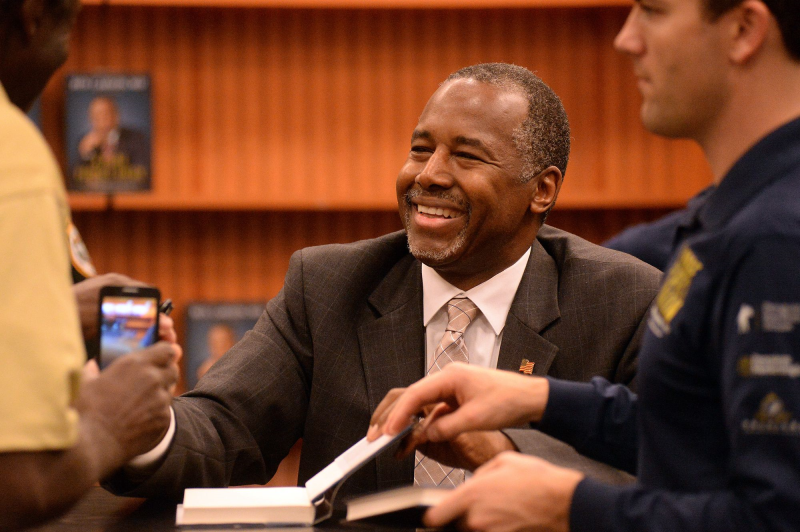 Ben Carson has defied the traditional presidential playbook, taking time off from the campaign trail to promote his latest book and sign copies for hundreds of fans, even in Democratic strongholds like Tallahassee.

He heads to more unusual ground in South Florida on Thursday: West Kendall, a Hispanic bastion, and Fort Lauderdale, the seat of the bluest county in Florida. Carson leads hometown candidates Marco Rubio and Jeb Bush in the latest Florida polls, behind only Donald Trump.

"I'm a little different than most of the candidates," Carson the author told the Miami Herald in a phone interview Wednesday. "I'm looking more nationally at everything that's going on across the country."

Before Carson the candidate campaigns to Miami-Dade County's Cuban-American Republicans, though, he might have a little catching up to do.

Carson's national approach means he didn't take a close look ahead of his trip at a key issue in local politics: U.S.-Cuba policy.

He was candid about not being up to speed.

"You're going to have to explain to me exactly what you mean by that," Carson said, asked about wet-foot, dry-foot. "I have to admit that I don't know a great deal about that, and I don't really like to comment until I've had a chance to study the issue from both sides."

On the Cuban Adjustment Act, he gave a similar response: "Again, I've not been briefed fully on what that is."

When a reporter explained the outlines of the policy, Carson said, "It sounds perfectly reasonable."

The reporter then informed him of abuses to the policy by Cubans who obtain residency and claim federal government benefits only to make frequent trips back to the island. The abuses have been documented extensively by the South Florida Sun-Sentinel.

"I think the way to fix that is not so much to abolish the act, but dealing with the specific area where the abuse is," Carson said, noting that Medicare and Medicaid fraud is "huge -- half a trillion dollars."

"We definitely need to focus on that," he said.

Miami's three Cuban-American Republicans in the U.S. House, Reps. Carlos Curbelo, Mario Diaz-Balart and Ileana Ros-Lehtinen, have called on reforms to the law; Curbelo's office is drafting potential changes. So has Rubio, a Cuban-American senator and Carson presidential rival.

"While it's important to preserve the protections the Cuban Adjustment Act affords to Cubans fleeing persecution, we need to eliminate the loopholes being exploited by those who abuse U.S. law, travel back to Cuba frequently and take advantage of American taxpayers," Rubio has said.

Many Cuban-American Republicans in Florida may already be more loyal to Rubio or to Bush (considered an honorary Cuban in Miami), so Carson may not be targeting them anyway.

Still, the retired neurosurgeon did speak in greater length about President Barack Obama's move to reestablish diplomatic relations with Cuba.

"I would certainly like to bring Cuba along, in terms of understanding how to treat people fairly. I think we've lost our leverage in doing so, because Raúl Castro's 83 years old," Carson said (Castro turned 84 in June). "He can't be there much longer. They're going to have a change in regime. That would be the time to normalize relations."

The U.S. trade embargo, he added, should be maintained.

Carson, who has owned a West Palm Beach home only since 2013, is not the first candidate from outside Florida to stumble in his initial encounter with Cuba policy. And at least Carson wasn't campaigning in earnest -- or appearing, say, in Little Havana's Versailles Restaurant.

Four years ago, Republican Herman Cain decried "foggy foreign policy" in Miami -- only to fail to respond to a Herald reporter's questions about wet-foot, dry-foot and the CAA.

"The wet-foot, dry-foot policy?" he asked. He couldn't answer the question later, either. even after dropping by Versailles.

In his 2012 book, America the Beautiful, Carson wrote about visiting Cuba with his wife, Candy, and a group of business leaders.

"The many street vendors and performers in the main city squares create a festive facade, but having spoken to Cuban refugees, I could only sympathize with the masses of people and hope that someday they can experience true freedom," he wrote. "Although some people, such as the documentary filmmaker Michael Moore, extol the virtues of Cuban society, the tide of illegal immigration is from Cuba to America, not vice versa."

"Unfortunately, although Americans are free to leave this country any time they want to go live somewhere else, such privileges are not afforded to the average Cuban or those in many countries where the government controls their lives," Carson concluded.