As his negotiators try to close a stadium deal with the city of Miami, one of David Beckham's most high-profile partners apologized late Sunday night for tweeting  a photo of a Che Guevara tribute during a business trip to Havana.
"Hola Cuba," Sprint CEO Marcelo Claure posted on his Twitter feed at 4:36 pm Sunday. "Happy to be here in La Havana, Cuba." 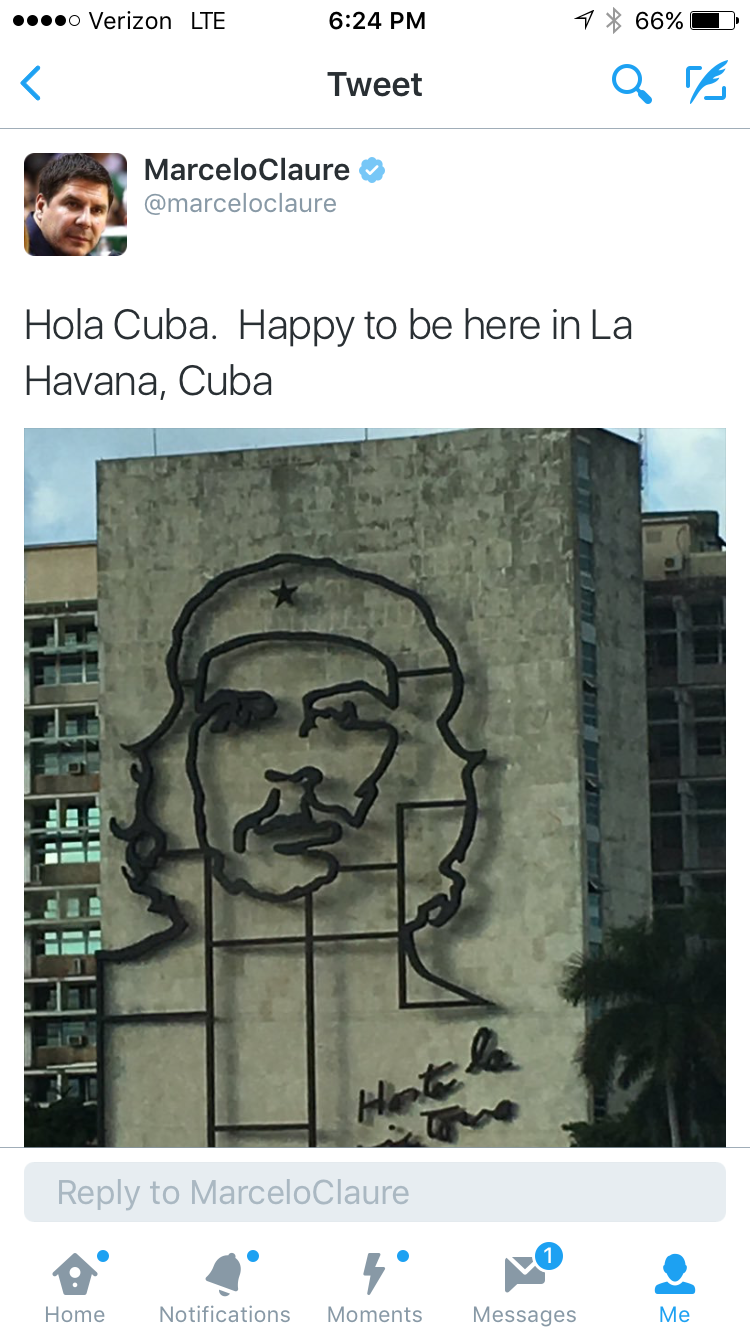 Claure, who is Bolivian, included a photo of a massive Guevara sculpture attached to a building's face, highlighting a late Cuban revolutionary reviled in Miami's exile community for his role enforcing discipline under Fidel Castro. It was a photo of Havana's iconic Revolution Square, and the posting drew some harsh reactions from Miami politicians.
"Somebody tell the guy that Che was a doctrinaire and a cruel executioner; also that it's La Habana," County Commissioner Xavier Suarez wrote in a tweet responding to Claure.
Carlos Curbelo, a Republican congressman representing Miami, later tweeted to Claure: "I wonder what motivated you to tweet out the image of a serial murderer who destroyed so many lives and families." 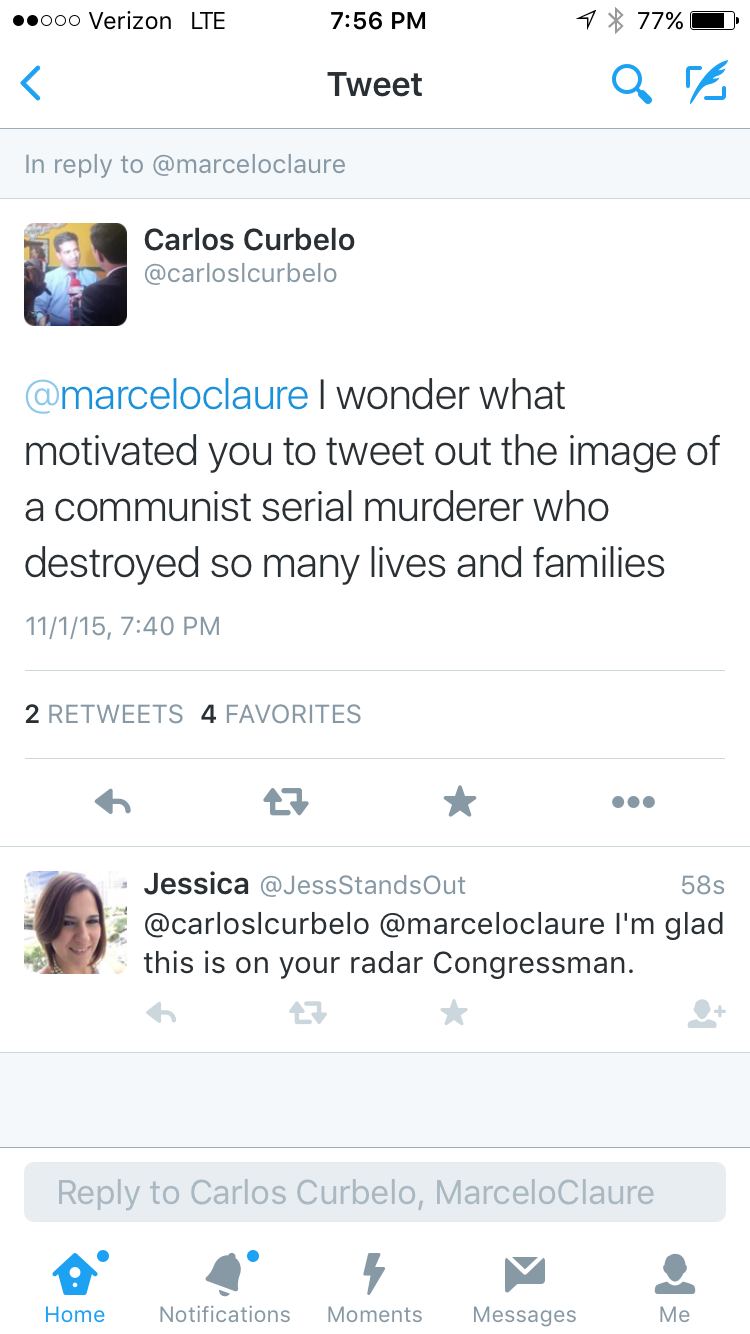 After 11 p.m., Claure posted a series of tweets explaining the photo. "I am in Cuba for business and I post photos of all my trips," he wrote. "Today I captured an image of Che Guevara in Plaza de la Revolucion." Later, he added: "My intention is not to offend anyone and my sincere apologies if I offended anyone." At 12:53 a.m., Claure tweeted: "I just deleted the picture I posted earlier while traveling in Cuba. My sincere apologies if I offended anyone. No harm intended." 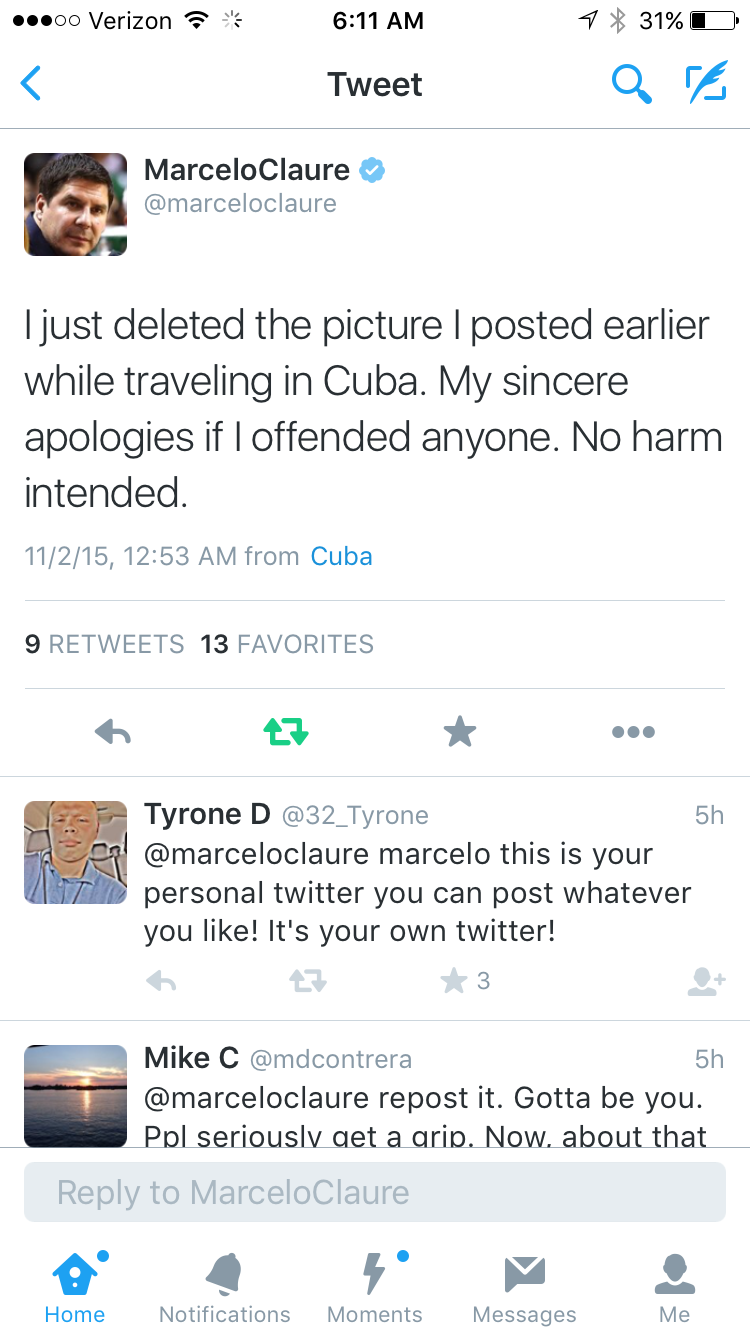 No city's political leadership has as much ill will toward the recent Cuba rapprochement as Miami's does.

Claure's Cuba trip comes at a dicey time for Beckham's stadium chase. His team is wrapping up talks with Miami to obtain city land for a stadium next to Marlins Park, and recently launched negotiations with the county school system to own the venue in order to shield it from property taxes.
Support of the Cuban community could be decisive for a planned city referendum next spring on the stadium plan. Miami Mayor Tomás Regalado has been a notable hard-liner toward Cuban relations, saying it would be unwise for Cuba to pursue a consulate for the city.

The situation prompted Beckham's soccer negotiators to issue a statement at 11:26 p.m. Sunday that said: "Marcelo is in Cuba for business reasons unrelated to [Miami Beckham United, the name of the soccer venture] and may be posting photos around the island during his trip. He arrived in Havana today and captured an image of one of the City's more  prominent sites. We apologize on his behalf if anyone was offended by the image."