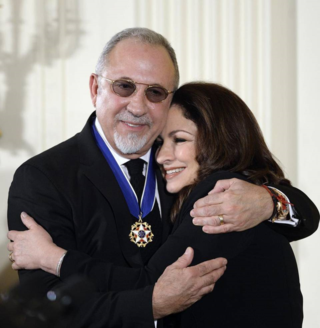 WASHINGTON -- Emilio and Gloria Estefan were honored and celebrated along with 15 other distinguished Americans at the White House on Tuesday with the Presidential Medal of Freedom.

The Miami-based Cuban-American couple are entertainers, musicians and producers known for their philanthropy. They entered the East Room to raucous applause, Emilio, 62, first and then Gloria, 58, as all the recipients walked into the stately room in alphabetical order. President Barack Obama presided over the ceremony that was also attended by first lady Michelle Obama.

Obama told the story of how the Estefans first met. “On a Miami night in 1975, a young woman named Gloria walked into a wedding reception and saw a handsome young man named Emilio leading his band. He was playing `Do the Hustle' – on an accordion. I’m quoting her now – she said she found this `sexy and brave.’“

“I mean, the brave part I understand,” said Obama to laughter.

“He brought her up to sing a few songs that night,” he said. Emilio Estefan a few months later asked her for a birthday kiss. “It wasn’t his birthday. He got the kiss,” said the president.