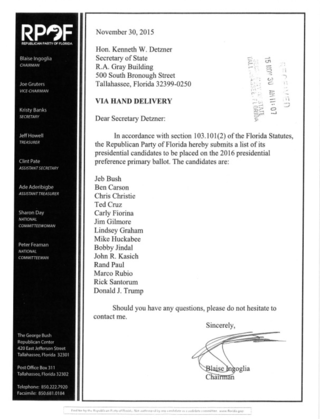 The Republican Party of Florida sent the state a list Monday of 14 candidates eligible for the March 15 presidential primary ballot. The only name missing: former New York Gov. George Pataki.

To qualify for the list, candidates had to attend a Florida GOP summit in Orlando earlier this month and sign an oath, or pay a $25,000 fee, or collect 3,375 voter petitions. Pataki did none of the above.

The list the party submitted includes Louisiana Gov. Bobby Jindal, who has dropped out of the race. There's still time for candidates to withdraw their names, just not to be added on to the list.