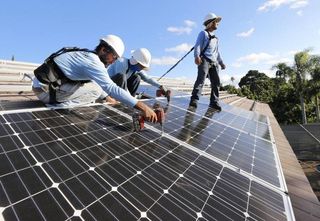 State Rep. Fred Costello is having his Ormond Beach home fitted with solar panels. He has invested in a company that is seeking a patent on new energy generation technology. He considers himself an energy wonk.

So when the former mayor filed a bill last week to open the state’s energy market to solar energy competition — by allowing homeowners and businesses to lease their rooftops to companies that generate solar power and sell it back to the grid — it seemed like the logical thing for a free-market Republican to pursue.

“I believe in innovation and competition because that’s how we get better,” said Costello, a dentist by trade. The current system imposes hurdles to competition and hurdles to innovation, he said. “That’s not what the free market is all about.”

But Costello’s idea is disruptive, and uncharacteristic for Republicans in recent years.

If it succeeds, it would create a crack in the powerful utility monopoly in Florida that allows only regulated power companies to distribute energy to others. For the first time, it would allow homeowners and businesses that generate 2 megawatts of power to generate and sell energy to their neighbors, and sell any excess energy produced back to the grid.

With fewer new demands on electric companies, the state’s utility giants would have less need to build expensive nuclear power plants or natural gas fired generators. “And that would be a good thing,’’ Costello said.

But the bill, HB 687, also would put into law much of what a proposed constitutional amendment being pushed by Floridians for Solar Choice would do. The coalition of renewable energy advocates, tea party and environmental groups pursued the solar choice amendment after years of trying and failing to get legislators to support opening the solar market to competition. Story here.